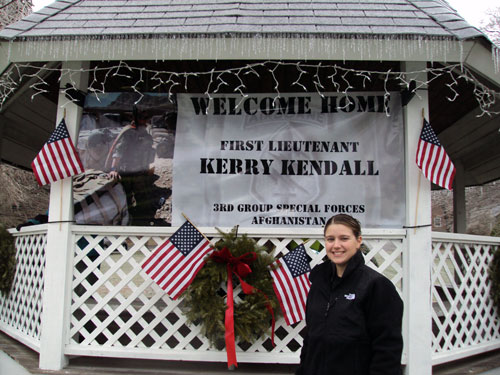 Above: First Lieutenant Kerry Kendall is back home after a deployment in Afghanistan (contributed photo)

After ten months serving with the Special Forces in Afghanistan, First Lieutenant Kerry Kendall came home to Southborough this weekend. A group of family and friends gathered in the center of town Monday morning – never mind the freezing rain – to celebrate her safe return.

A banner heralding the Southborough native’s homecoming hung on the gazebo in front of the fire station. American flags were tucked among the Christmas wreaths that adorned the structure. A huge American flag was suspended dozens of feet in the air off the end of Southborough’s ladder truck. All to welcome home a Southborough soldier with an impressive resume.

While in Afghanistan, Kerry worked in Special Operations and received an Army Commendation medal for her actions during her missions. You can read more about Kerry’s life in Afghanistan in this post she authored while deployed. (It’s one of my all-time favorite posts on the blog.)

Kerry will enjoy the holidays with her family in Southborough, before returning to Ft. Campbell in mid-January. After that she’ll be on to Ft. Bragg to attend a Captain’s course of training.

Kerry’s family was the driving force behind her homecoming celebration, but dad John said many people helped along the way. “Special credit to Andy Gleckel who designed and provided the banner, Southborough Board of Selectmen and Vanessa Hale for allowing us to use the gazebo, and all who helped making our welcome home so special – Lt. Neal Aspesi, Southborough FD, Steve Whynot, VFW Commander, Lisa and Matt Braccio, who do so much for deployed soldiers, and Selectman Dan Kolenda, who stopped by to meet Kerry, veteran to veteran,” he wrote via email.

Kerry’s family and friends sent along a collection of photos from yesterday’s homecoming, and you can see them in the gallery below (click an image to enlarge). Please join me in welcoming Kerry home and thanking her for her service.

Welcome home, Kerry! So very proud of you. Hope you get a chance to visit my mother, Arlene Williams. She is at Beaumont Nursing Center in Northborough. Christmas blessings to you and all of your family!

Welcome home, Lieutenant. Nice to have some good news in town. Congratulations on getting into the Captain’s training program.

Welcome home Kerry! We are proud of you and so grateful!

Kerry, thank you for your service! you are a brave and giving young woman. I wish you and your family the very best.I am sure they could not be more proud of you.