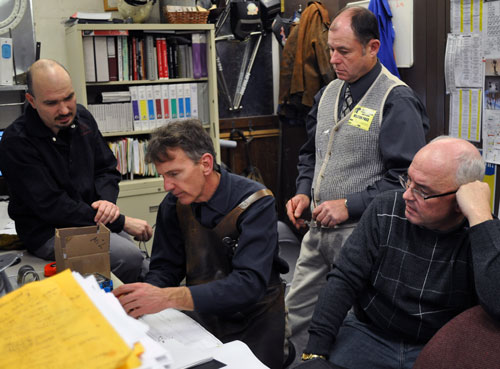 Last April Southborough voters signed off on $880K to fund the town’s share of a project to renovate Assabet. In this press release, the school gives an update on how the project is progressing.

The first hurdle in the $62.4 million repair project at Assabet Valley was getting unanimous approval from the seven in-district communities of Berlin, Hudson, Marlborough, Maynard, Northborough, Southborough and Westborough, and the
Assabet Valley administrators and School Committee were thrilled to clear that hurdle in the spring of 2012.

State Treasurer and MSBA (Massachusetts School Building Authority) Chairman Steven Grossman and MSBA Executive Director, Jack McCarthy, made a trip to the school in October to deliver a check for $33.1 million, the state grant amount awarded to the school as partial reimbursement of the project. Still in the planning stages, the work is scheduled to take place over the next few years, using Design Partnership of Cambridge as the Architect and Strategic Building Solutions as the Owner’s Project Manager.

“We are continuing to work with the architects and our Project Manager to come to further agreement on the design. At this point, we have submitted plans for 60% of completion of construction documents, and by the middle of December; we’re going for 90%. After each submission, we pause to get more cost estimates and make adjustments if necessary, as we need to stay within our budget,” commented Patrick Collins, the Assistant Superintendent at Assabet.

“In February we plan to go out to bid. We are prequalifying subcontractors now, making sure they are in good standing financially and are licensed and certified as needed. We’ll be signing a contract with a General Contractor, who will then have a list of prequalified subcontractors from which to choose. We hope to announce the awarding of the bid to a General Contractor by mid-March.”

Some early demolition work can be done in late spring in an area not currently in use on a daily basis, and then, on July 1st, Phase 1 begins in earnest. The administration and office wing will be done first, over the summer, replacing windows, doorknobs (changing to lever style to be handicap accessible), HVAC, and lighting. Modular space has been procured for the basketball courts, offering 4 classrooms and 3500 square feet of office space for the summer.

“So far, the project planning has proceeded on schedule. This is an incredibly complex project with ten different major phases of work, and overriding the whole thing is the mandate to minimize the impact on the instructional programs,” added Collins. “We want the parents and the communities at large to know that instructional excellence in the classrooms and the technical programs will continue throughout the duration of the project.”