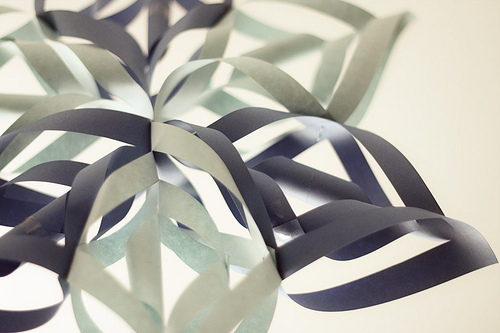 Last Saturday, Southborough residents made nearly 100 paper snowflakes to send to the schoolchildren of Newtown, Connecticut. The Southborough Library, in conjunction with Bigelow Center for the Arts, had planned to host another snowflake-making session this coming Saturday, but they recently learned the program, organized by the Connecticut PTSA, has been suspended.

“Thank you to everyone who has donated snowflakes on behalf of the children of Sandy Hook Elementary School and the community of Newtown,” the state PTSA wrote on its website. “We know that each snowflake represents the emotional outreach of the person making it. We have been overwhelmed by the outpouring of generosity from around not just the country but the world. At this time, we have enough beautiful snowflakes to blanket the community of Newtown.”

Since the program has been suspended, the snowflake-making session originally scheduled for Saturday, January 5, at the library has been canceled.

Lanting Huang-Truong, who organized Southborough’s snowflake making effort, said she’s working on finding a home for all the snowflakes made last week. “I have contacted some children’s medical centers to see whether they would accept the donation,” she said.

Know of a place that could use some lovely snowflakes to decorate their space? Shout it out in the comments below.

Children’s Hospital comes to mind. Or a pediatric ward at UMass Med or? It would be too bad to have them go to waste.

I have contacted Boston Children’s hospital, UMass Pediatric ward and one other medical group near by. They are concern about the fire hazard. Because the snowflakes are made of paper, it is not going to pass the fire code….. Although I was transferred from the operator to about 4 departments, and ended up seemed to be a right place at the children’s hospital, again, the fire code issue. However, there are 4 cases 3’x3’x1′ case that possible our snowflakes can be displayed but, I have to do a proposal and a mock up snowflakes exhibition to submit it and get approval, and it has to look something good…….I was thinking, kids would love them just to hang it up and I am sure they would be so cheerful seeing all the snowflakes, but, it looks like there are more than logistics I have to go through while approaching to the hospital. Thanks for the suggestions. If you know any business would like our snowflakes please do contact me. Thank you.

Sherri’s House in Worcester would be wonderful as well, it supports pediatric cancer patients and their families.

I like the ideAs of donatin them To a hospital . if that doesn’t work Perhaps they could be used in groups of 26 in local businesses and buildings. Each one would represent a life lost and they would be kept together around town. I am sure local places would welcome them especially knowing towns people have made them.

How about groups of 27 as the mother of the killer also lost her life. She seems to be completely forgotten yet still a victim.

Sorry it was not deliberately done!

I think that is a fantastic idea! I will start calling local business. If any of you in the community who can chip in some time to ask the local business or if you own the business and willing to participate, that would be really great! I really love these now homeless snowflakes to shine in 26 local business or buildings, for a good cause!

I found a school to display snowflakes and I am really thankful for that but, with what we have (about 150 snowflakes and counting) and people still drop them by in the library as of today, we need more community places to get involved. thanks.

Franciscan Hospital for Children. I can put you in contact with the community outreach person. A few kids for S’boro, including my own, have spent a lot of time at FHFC!

will call. thank you for the suggestion.

If anyone finds out an address for any other hospital or nursing homes that would accept our snowflake donations please let us know because I have several I don’t want to go to waste. Thanks

Like Lanting pointed out…..fire codes. Contact Lt. Neal Aspesi at Southborough FD 508-485-3235. He can explain in detail about decorations in public places.

had the school been decorated with any of the snowflakes.I didnt hear anything about it and just googled it and didnt see anything either. Just wondering how it went.