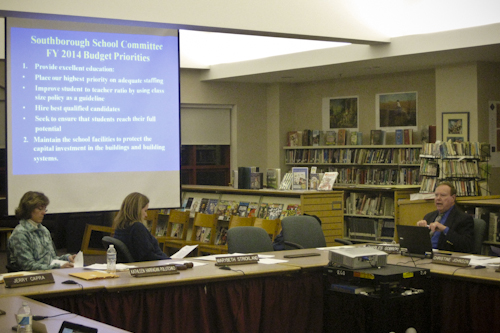 Superintendent Charles Gobron unveiled preliminary fiscal year 2014 budget numbers for the Southborough K-8 schools last night. The early numbers have the schools coming in at about $17.6M, a 4.06% increase over the current fiscal year. Even with the increase, Gobron said the schools are not getting everything they had hoped for, and may be required to make difficult cuts.

Gobron told the K-8 School Committee the preliminary budget includes $200K in cuts to staff, an amount equivalent to four full-time positions. Gobron said they have not yet identified which positions would be cut, but said some of the savings may come from eliminating or reducing part-time positions as opposed to full-time teachers.

The cuts are necessary in part due to an unexpected increase in mandatory special education services totaling $537K, Gobron said.

While last year the district saw a significant savings after several special education students aged out of the system, School Committee member Marybeth Strickland said the district saw the opposite this year as new students requiring special services moved into the district. Limited state funding for the mandated services puts the schools “between a rock and a hard place,” she said.

“We can work very hard to control the budget, but these are mandatory obligations we have toward these children,” Strickland said. “It’s a difficult budget situation we’re presented with.”

Despite the budget’s $690K increase over the current year, Gobron said it still does not include many items he had hoped to fund this year, including a K-5 math specialist, non-instructional support at Trottier, and additional administrative support at Finn and Woodward.

Another area the preliminary budget does not fully fund is technology, Gobron said, meaning the district will be “unable to move at the pace we had hoped.” While the budget includes $31K for technology maintenance and a new shared network administrator, Director of Technology Jean Tower said it does not do as much as she had hoped in improving staffing, network speeds, and access to digital devices.

Gobron stressed the numbers in the preliminary budget are still “fluid.” He plans to present a more nailed-down version of the budget at the School Committee’s February meeting.

Reduce staff? We hear the same song every year before budget time, It worries the parents and they come to town meeting to vote this one budget. Isn’t it wonderful that year after year, the schools get their budget passed THEN they discover they do not need to reduce staff at all.

I thought Mr. Hamilton told us school population was on a decline yet the school budget increases? Shouldn’t less kids to educate result in a lower budget?

It is true that our K-8 school population has been declining since 2005 and is expected to continue to decline for the next for the rest of the decade. The decline is on the order of 2%-4% per year. That in turn should lead to staff reductions either by retirement or regrettably layoffs.

However, our school labor contracts pretty much bake in a 7+% average increase in salaries each year so even if staffing levels fall in line with our school population our salary costs will continue to rise.

I’m curious what the unexpected increase of 537K in sped costs are. That is a huge number! How many new special ed kids moved into the district? and what services are they getting that could total that much money. A full time aide and transportation should be no more than 50K. I doubt there are 10 new kids who need a full time aide. At these cost levels, there comes a point where the town is going to need to hire specialists and lawyers that can fight back against these overreaching families.

I think you are seriously underestimating the costs of some special ed. We are mandated to provide these services. These can run the gambit from providing a child with help in reading or speech to very expensive support for severely handicapped children. It is possible to run up a $100k bill (and more) per year on a single child.

Depending on the circumstances we can be responsible for educating children with special needs that enter our system until age 21.

Not all special ed children are educated in our school system. Some require specialized services not available in the traditional school settings. I believe we are part of a collaborative that provides some of these services. Other receive their services in specialized facilities with specialist teachers.

The state is supposed to help us out in the cases of the most expensive needs but I am sure that finding jobs for their cousins is a higher priority.

While I am a fiscal conservative and believe we need to scrutinize these expenses I am also proud to be part of a society that is committed to helping every child reach their potential. The bottom line is that these services can be very expensive and we have only limited options on how we deliver them.

This article from 2010 has some information:

What makes you think they are “overreaching parents”? Perhaps they are just like you and I and want the best for their children. Perhaps when children see the care, effort and love that is given to these youngsters with special needs they, in turn, are caring and loving themselves. I have seen it first hand…….many times.

I would much rather see my tax dollars go to children with special needs ( which could have been mine or yours, by the way) rather than to lawyers and specialist to “fight back”. How ridiculous.

I would like to add that they are children WITH special needs…..not “special ed kids”. Please make the effort to be more respectful.

Sorry, I forgot to direct both my previous comments to “KT”.

What makes anyone think that these expenditures aren’t associated with the District’s over use of special education attorneys in their efforts to block parents from receiving the basic services their children require? I know of no “over reaching” parents but know of plenty who have children who are passed on grade to grade without learning how to read, write, perform basic life functions, are secluded, restrained, denied access to programming. Is it really too much to ask to have your child learn? I suspect that a close examination of lawyer costs spent by the District would yield some interesting details.

I’m all ears for any proof of what you suggest, my original question was sincere in asking where all the money is going because I really can’t even guess. I don’ t understand how it costs over 100K+ to help severely handicapped children. I really do want to know what our money is buying. I also don’t believe that 5 or more severely handicapped children moved into the district in the past year. I’m just trying to make assumptions that to me seem most likely. I think the mostly likely thing is that this new 500K+ cost is going to at most 3 kids (I really hope its not less than 3 but I wouldn’t be surprised. I also really hope I’m wrong and that if I knew where the money is going I’d be content or at least maybe Gobron is playing a game with some really fuzzy math). Anyway, my assumption of 3 would be greater than a 10x expenditure than what we spend on the average student, and that just seems like too great a multiple. I also agree with you that the district IS ignoring a set of the student population and in my opinion it’s because after these costs by the over-reachers, there is nothing left. I’ve heard of plenty of over-reachers, there are whole groups to aid you in doing so. I really am fairly liberal, I’m all for providing reasonable services that provide care, effort, and love to those who really need it, but it’s still ok to be fiscally responsible while doing so, by reasonably questioning who really NEEDs what. Lastly there is absolutely nothing offensive about the term special education kids.

Some of the facilities that support special needs students are closer to hospitals than school facilities. The care and education of children with the greatest needs can be very very expensive. I sat on Advisory for a number of years and saw that a single student who we had been caring for and educating went “off the books” after turning 21 and it had a very material effect on the K-8 budget (enough to pay for several teachers with full benefits).

I would never be accused of claiming that we have solid financial management in our school system but this issue is larger that just careful fiscal management. This remains an unfunded mandate from the state where jobs for cronies are more important that educating children with special needs.

Our child received very expensive services from Southborough schools for several years. We were extremely grateful for the attention to his needs that was shown by all the special education staff and others. I am certain that, without those services, he would not be the adult he is today – smart, interested in being successful, working and paying taxes, and not the very sad story that I would have imagined without this assistance. Thank you Mr. Hamilton for your words — I believe our son is an example of how special education dollars are a valuable resource to provide the brightest future possible for everyone. Our family appreciates all that was done for him and all of us.

…and I appreciate living in a community where this is done! I’m glad your son is doing well.

Your case in particular is what I’m interested in. What services did your child receive and how much do they cost? Could he still be where is is today with 80% off the services he received? People should be after value and not just take everything they are entitled to. That way they are helping their fellow neighbor as their fellow neighbor is helping them. 500K is just such a huge number, and many members of our community just can’t afford another $166 a year to fund this.

I was originally assuming the medical/nursing care wasn’t included in this, but Al has led me to realize that this numbers must come from severely handicapped who I assume require round the clock nursing care etc. It just doesn’t seem right to lump this in with the school budgets. The huge numbers gives the special ed programs a bad name and inhibits those who need minor services from getting anything.

I encourage you to learn more about the Northborough Southborough Special Education Parent Advisory (NSPAC) by visiting the website http://www.nspac.org and/or attending one of our meetings. Although we are legally mandated to work closely with the district administration and educators to identify areas of need and act in an advisory role to the school committee and the administration, we have had minimal success in this area. We always welcome parents and other interested parties to help us achieve our mission.
We have an informal, morning coffee meeting scheduled for Jan. 31st at 10:30AM at the Northborough Public Library.