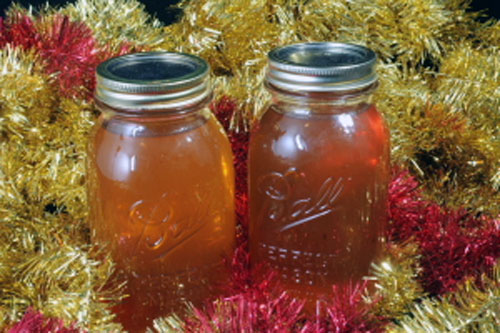 [This is the latest in an ongoing guest series brought to you by Southborough’s Culinary Underground. With a nasty flu season upon us, Chef Lori this week shares a recipe designed to help with the sniffles.]

I like to eschew over-the-counter head-cold remedies. They seem to be all side effect/no main effect. And since we’ve heard that it’s a bad idea to mix drugs and alcohol, the availability of Nyquil has always been puzzling. Stuff’s about 25% alcohol but its cult members genuflect before it. I tried it once at the urging of a friend and had a mind-blowing out-of-body experience that’s still providing interesting flashbacks lo, these many years later. Well, at least I forgot about the sniffles.

Why not skip the drugs and just stick with the alcohol? The hot toddy has a long history as a cold remedy. Which brings me to boilo, a traditional Christmas holiday drink from the eastern Pennsylvania coal region. (The “Champagne of the Pennsylvania coal region,” to be exact.) It’s a highly spiced, citrusy, honey-sweetened whiskey concoction that’s heated and imbibed as hot as humanly possible. I forgot all about it until Chuck was advised to avoid all cold remedies that contained epinephrine. I thought a hot toddy might provide a little relief and remembered the boilo.

My grandmother used to brew up a batch every year for my dad, a little gift to see him through the cold season. I’ve always used her recipe, which she insisted must be made with Cobbs Creek whiskey. (It’s not made anymore. Its South Philly distiller closed in the early eighties after having, infamously, made it onto the Superfund hazardous materials list.) Any inexpensive blended whiskey will do – it doesn’t have to be top-shelf sippin’ whiskey. I’ll use Seagram’s Seven, Canadian Club, Old Overshoe – something like that.

Since discovering the medicinal properties of boilo, Chuck’s cold regime consists of: Hall’s lozenges, gallons of ginger-ale, infusions of hot ‘n sour soup, and a jelly-jar of molten boilo before bed. And lots of sleep. With the exception of the soup and sleep, these are all placebos – but whatever works, right?

In a heavy saucepan, mix together the whiskey, honey, and spices. Bring to a boil over MEDIUM-HIGH heat; boil 1 minute. Remove from heat and let stand overnight.

Add the orange juice and stir; strain the mixture and bottle. Will keep on the shelf indefinitely.

To serve: Heat ¾ cup of the mixture to boiling. Drink as hot as possible for relief from symptoms of a cold and flu OR to celebrate the season!

Culinary Underground School for Home Cooks is committed to furthering the art and craft of home cooking through engaging and educational hands-on and demonstrations classes. Using the best seasonal ingredients, mastering techniques, minimizing prep, and maximizing flavor are the focus of their classes. For more information and a class schedule, visitculinaryunderground.com.

Thanks! I sure could have used some this past week…guess now that I am on the mend I will be making some to have on hand since it keeps on the shelf forever :-)