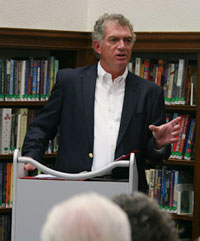 After saying earlier this month he was undecided on whether to run for a second term, Chairman of the Board of Selectman John Rooney has decided to throw his hat in the ring. Rooney pulled his nomination papers at the Town Clerk’s office this morning.

In a statement to My Southborough, Rooney explained his decision to run again.

To be an effective selectman in Southborough, you must be willing to dedicate countless hours away from home, and many more hours at home preparing for meetings.

We live in a town I care very much about, with tremendous residents and remarkable employees. The town faces many real and unavoidable challenges in the immediate future. The need to reexamine the way we do business has never been more important, as the cost of municipal services increase while at the same time our town revenues go in the opposite direction. Leadership requires the ability to make decisions for the good of the town, regardless of personal influence or agenda. Decisions that impact the status quo will need to be considered if we as a town are committed to maintaining quality education, public safety and public works.

After long discussions with my family, I have made the decision to ask residents to allow me the privilege of serving another three years on the Board of Selectmen. I would encourage those interested in becoming a selectman to go to the Town Clerk and obtain nomination papers. The town is always the beneficiary of discourse and debate, and an uncontested election deprives us of that objective and is never healthy. The truth is I feel much more qualified to be a selectman than I was three years ago, and I would be honored to receive your support in May.

Rooney is the first to pull papers in the race for selectmen. Residents have until March 22 to do so. See this post for more information.

(Image: John Rooney at a candidates forum during his run for election in 2010)

Thank you Mr. R. on behalf of myself and the town.

Your efforts to try and run this town as a business is appreciated. Now if only the school committee(s) could understand that concept.

On a somewhat related note, does anyone know what the town’s unfunded liabilites are?

I can name some of them but do not have any idea of their magnitude although in some cases I suspect it is large.

Sick/Vacation pay – On retirement/departure an employee is entitled to collect unused sick and vacation pay. In the past this has not been capped like it is in the private sector so we have ended up paying nearly a years worth of pay. I believe there has been some correction of this problem but in the past we have not accrued for this expense.

Retirement Health Care – Health care is part of the retirement package. Employees can retire as early as age 55. Once they qualify for Medicare we pay for a supplemental policy until then we pay for a standard policy. We do not accrue for this liability.

Pensions – There is a general recognition that our pension obligations are under funded particularly in light of the possibility of employees retiring as early as they are permitted. Here is a report from Wayland that suggests that their unfunded liabilities are on the order of $36 million http://www.wayland.ma.us/Pages/WaylandMA_Finance/Unfunded%20Liab.pdf. My suspect that we are in a similar boat.

The situation that faces public employees and public retirees is not that different from Auto workers in the 90’s they could not conceive of their employers not paying the benefits they thought they earned. But in the end their pensions were under funded and the benefits were significantly cut. If I were a union member I would be pressing for the funding of these unfunded liabilities.

Pension reform must be part of the solution as well. It is fiscal suicide to permit a highly skilled worker to work for you for 20 or even 10 years and then provide that person and their family pension and health care benefits for 20 to 30 years.

thank you Al. trouble ahead..

I don’t always agree with Selectman Rooney, and I truly wish he would be more succinct in his comments. But I greatly appreciate John’s thorough analysis, hard work, and intelligent debate. He never rubber stamps an issue. Southborough benefits from his contributions and voice. Thank you for running again. Good Luck.

I hope the Selectman is doing everything he can to prevent the 40B in the area, if not I think he and other town officials will pay the price come election time!