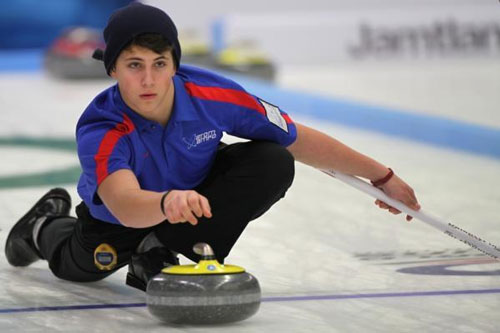 Southborough teen Korey Dropkin has traveled all around the world competing in curling competitions, but this week he gets to defend his national title on his home turf. Dropkin is playing in the Junior National Curling Competition this year hosted at Broomstones Curling Club in Wayland.

Broomstones is Dropkin’s home curling club, and he tells the Metrowest Daily News it’s exciting to compete in front of a home crowd.

“This will be different for me,” said Dropkin. “The three other nationals have been in been in Bemidji, Minnesota, Alaska and Madison, Wisconsin, all away from home. Everyone is rooting against you. Now it’s kind of cool to get an opportunity to be the home team and have everyone cheer for you.”

Dropkin is hoping to capture back-to-back titles after winning the 2012 Junior Nationals last year. His team, which also featured Korey’s older brother Stephen, went on to place fifth at the Junior Worlds in Innsbruck, Austria.

He’s off to a good start. As of today, Team Dropkin, which includes fellow Southborough teen Connor Hoge, has a 7-1 record having bested teams from Wiconsin, North Dakota, Michigan, Washington, and Alaska among others

Team Dropkin is scheduled to play again today (Thursday) at 4:00 pm when they’ll take on the #2 seed team, but a note on the Broomstones’ Livestream page says the club is currently without power thanks to today’s windstorm, so no telling if the match will happen as planned.

For updates on their charge through the Junior Nationals, follow Team Dropkin on Facebook, and to read more about Korey Dropkin’s young but distinguished curling career, check out this article in the MWDN.

Update 3:00 pm: Power has been restored to the curling club, and Team Dropkin is now scheduled to play at 8:00 pm today. You may be able to catch the game streaming live on the Broomstone’s Livestream page.