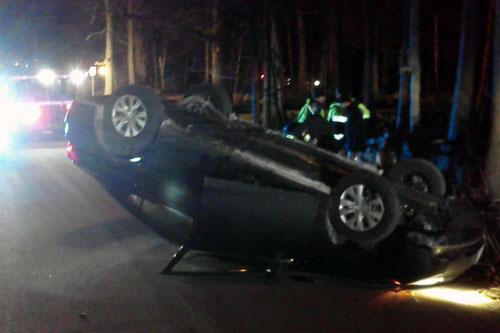 Above: A car rolled over on Oregon Road last night (photo by Southborough Police Department)

Southborough emergency responders have been keeping busy this week. Last night police and fire crew responded to a rollover accident on Oregon Road.

“Commuter traffic was tied up for a bit, but the good news is that the driver is doing fine,” Southborough Police wrote on their Facebook page.

On Sunday evening, fire crews were called to the aqueduct along Main Street after two golden retrievers fell through the ice. Reports the Metrowest Daily News:

Wearing heavy exposure suits, firefighters Matt Rice and Jason Roach lifted each dog onto the boat separately, and a team of people on shore pulled the boat up and out of the water and quickly back to dry land.

One of the shivering dogs slipped off the boat as it was being pulled out, but (Capt. Mark Sadowski) said both were back on shore less than three minutes from the time firefighters stepped on the ice.

“It was a little scary at first, but they did a great job,” said (owner David Murphy), who serves as managing director for MetLife Financial Group of Massachusetts.

After a lot of warming up and some well-needed rest, the dogs were OK, Murphy said.

You can read more about the ice rescue – and see a picture of the happy pooches – in this article by the MWDN.