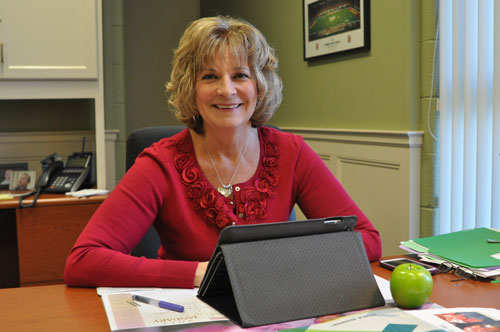 Above: Superintendent Nawrocki announced she will retire at the end of the school year
(contributed photo)

Assabet Superintendent Mary Jo Nawrocki announced recently she will retire her post after 38 years with the school. Nawrocki began her career at Assabet as a physical education and health teacher, and eventually served as principal and then superintendent of the school. You can read more about her impressive career in this press release from the school.

For 38 years, Mary Jo Nawrocki has driven from her home in Marlborough to the Assabet Valley Regional Technical High School every day like clockwork. On June 30, 2013, the daily trek will end. Nawrocki recently announced to her staff and School Committee that she will retire. “I was told that when you’re ready, you’ll know it. It’s been a great career, with occasional speed bumps and potholes that I had to go through or around. But it’s time. I’m ready, even though I know I’ll miss the students and staff. I’m beginning to look forward to ‘life after Assabet’ “admits Nawrocki.

Nawrocki grew up in Johnston, Pennsylvania, and attended Penn State University, majoring in Health and Physical Education. She began her teaching career at Bensalem High outside of Philadelphia, where she taught for three years. When husband, Mark, was transferred to the Boston area, she found a position in Wayland, but was only there for a year before someone from the Department of Education called to tell her that a new voc/tech school in Marlborough was looking for a Health/Phys Ed teacher. The rest, as they say, is history.

Besides teaching, Nawrocki coached both Basketball and Track and Field, and began working on collaborative projects with the English Department. She earned a Master’s degree in Curriculum Development and Leadership from Lesley University and was appointed to Director of Curriculum and Student Assessment at the school, where she was still able to have a strong presence in the classroom. Developing curriculum to improve MCAS scores and keep the school growing academically and technically became a priority. Also, during this time, Nawrocki wrote and implemented a Teacher Mentor program that is still being utilized today for new staff members. “It’s imperative to give new teachers an opportunity to work with a veteran teacher, have someone they can turn to easily with a question, and to help ease them into the school culture. Before you know it, they’re sharing best practices. By the same token, the new teachers are infusing new life and ideas into the school. It’s a win-win situation,” explains Nawrocki.

Nine years ago, Nawrocki advanced to Principal at the school, which she admits was probably her favorite position. “I still had a strong connection to the students and the teachers on a daily basis, yet I felt that I could make a difference. Assabet has always been a fantastic school, but I realized that we could never rest on our laurels. We had to always stay one step ahead, and my theme my first year as Principal was ‘Raising the Bar.’ We had high expectations for EVERYONE in the building. We revamped the whole math curriculum. Every course had high expectations for ALL students. We just built upon our former successes and continued to notch it up. I created the Principal’s Leadership Team – a group of students who were my eyes and ears in the building, making suggestions, and representing the school at various functions. I wanted them to feel empowered, to know that this was THEIR school and they could give back by helping to make it even better for the next generation of students. We brought in Advanced Placement courses so we could make sure our students were equally prepared for the best colleges.” Nawrocki was named the Massachusetts Principal of the Year by the Massachusetts Association of School Administrators.

After five years as principal, Nawrocki was the School Committee’s choice to fill the Superintendent/Director position. Once again she hit the ground running and began to make her mark. “Again, we couldn’t be content with our success, but we had to keep going to the next level. STEM has become the buzzword in education, but, quite honestly, Assabet has excelled at Science, Technology, Engineering and Math for years. What often appears as new and innovative in some districts has been commonplace in technical schools. But we had to expand our offerings, and take stock of what we had in place. We eliminated Facilities Management, for example, and brought in Biotechnology. We have college partnerships with Northeastern University with our Academy for College Excellence, and with Biotech and HVAC with Quinsigamond Community College. We have a QCC Psych course taught by their instructor right here on our campus for our students. There are articulation agreements with Wentworth, WPI, Johnson & Wales, and many others. We have Virtual High School and Moodle courses so students can continue learning beyond the normal school day and times. We can’t ever stop trying to improve. As Superintendent, I don’t get to know as many kids very well, (even though I’m a frequent guest lecturer in the Senior Leadership class), and I miss that, but I know that my leadership really does impact the lives of all the students and that perhaps because of my influence there are things here that may not have been available otherwise. Do I have advice for my successor? Yes! I would say that as a superintendent, there is no “perfect time,” so never waste time waiting for it. When opportunities present themselves, you have to have the courage to move forward, knowing full well that you will encounter curve balls along the way. What helps you persevere is the fact that the results gained will benefit your school, in particular your students!“

Nawrocki currently sits on the board of the Marlborough Regional Chamber of Commerce, the MAVA (Massachusetts Association of Vocational Administrators) Board of Directors, is a Commissioner to New England Schools and Colleges, on the Quinsigamond Community College Leadership Team, and the Worcester County Superintendent’s Association. She served on the Marlborough School Committee for six years, and also was a Marlborough City Councilor for six years. As for retirement plans, she will travel with her family throughout the summer, and hopes to teach some graduate level courses starting in the fall. “I’m a gym rat, so I’ll be hitting the gym even more than I do now, and I love to paint and do crafts, like stamping cards. Keeping busy won’t be a problem,” laughs Nawrocki.

Nawrocki lives in Marlborough with husband, Mark. They have three children and two grandchildren.