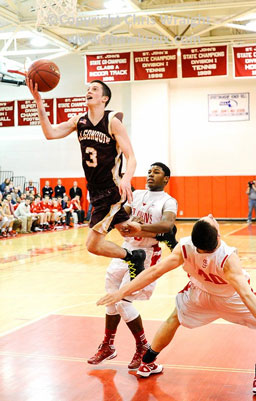 Above: The Algonquin boys basketball team scored a come-from-behind overtime win against St. John’s in their final game of the regular season last week (photo by Chris Wraight)

The Algonquin boys and girls basketball teams hope to be tough to beat in the postseason this year. Both had stellar regular seasons, and are entering the district playoffs with high rankings, while the Algonquin gymnastics team, a postseason stalwart, missed out on a trip to the state competition this year by a fraction of a point.

With a regular season record of 19-1, the Algonquin boys basketball team is the top seed in the Central Division 1 bracket. After a first round bye, they will play on Thursday in the quarterfinals against either 8th-seed Shepherd Hill or 9th-seed Fitchburg. The game starts at 7:00 pm at Algonquin.

The girls basketball team is seeded second in the district after a regular season record of 17-3. On Friday they’ll face 7th-seed Worcester North in the quarterfinals. Game time is 7:00 pm at Algonquin.

After an impressive regular season, the Algonquin gymnastics team placed fifth in the South Team Girls Gymnastics competition last weekend, and with only the top four teams advancing, the defending state champions will miss out on competing in the MIAA state meet for the first time in at least four years. The difference between fourth and fifth place at the sectional meet? A mere .375 points.

Like their basketball peers, the postseason also begins this week for the Algonquin boys ice hockey team. Ranked sixth, Algonquin will play 3rd-seed Shrewsbury on Wednesday in the Central Division 3 quarterfinals. The game starts at 7:30 pm at North Star arena in Westborough.

For other Algonquin athletes, the postseason is already underway. Algonquin students competed in the District 1 swimming and diving meet earlier this month. You can see the results for the boys here and the girls here. Of note, Algonquin’s Drew Beland place 3rd in both the 200-yard Individual Medley and the 500-yard Freestyle.

In indoor track and field, the Algonquin girls placed 19th and the boys 24th in the Division 2 meet earlier this month. After the state competition last weekend, two Algonquin relay teams advanced and will compete in the New England Interscholastic Indoor Track & Field Championships in Boston this weekend.

On the slopes, a number of Algonquin skiers are competing today in the Alpine Ski Tournament at Berkshire East Ski Center.

Did I miss any postseason accomplishments? Please shout them out in the comments below.

The boys JV hockey team made Algonquin history by winning its first championship on Saturday Feb. 21st against Wachusett. The team went to the championship game after finishing in first place in the regular season, only losing one of the 14 games they played. Congratulations to the hockey team and their coaches on a great season!

All-States Tournament held Feb. 22nd & 23rd: Congratulations to Joe Cozzolino for wrestling out of the pigtail match and going 3-2 before being eliminated. Alex Mazzola was eliminated after 2 losses. It was a very long and grueling week of wrestling for the boys and they should be proud of themselves for making it this far.

The following wrestlers placed in the D1 State Tournament held Feb. 19th & 20th:
Alex Mazzola 2nd place at 170lbs.
Joe Cozzolino 6th place at 126lbs.
Christian Saccone 7th place at 120lbs.
Alex and Joe have definitely secured a spot in this weekend’s tournament while Christian will serve as an alternate and there is a very good likelihood he may get a chance to participate.