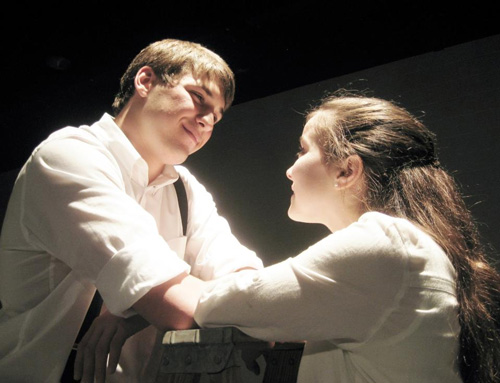 Above: Performances of Our Town run nightly through Saturday (photo via Facebook)

The first time I read Thorton Wilder’s Our Town, I was a student at Algonquin Regional High School. That was a long time ago. This week, the latest generation of Algonquin students are staging the classic in celebration of the play’s 75th anniversary.

Algonquin English teacher Tom Alera, who directs the show, wanted to help his students understand what life was like 75 years ago, so he enlisted the help of seniors in Southborough and Northborough. Writes the Metrowest Daily News:

Algonquin students are in the middle of rehearsals for “Our Town,” the classic Thornton Wilder play about the typical early 20th century town. Instead of just reading from a script, they decided to ask residents who were around in the early 20th century what things were like.

“In those days, we only had four buses for the whole town,” said (Southborough resident Vi Latpewicz), the baby of the group at 90, pausing to rattle off the names of the streets they patrolled.

(Lena Carloni), 92, said there were two entrances to school, one for boys and one for girls.

“And you weren’t caught at the wrong one,” she said.

The show opened last night, with performances continuing daily at 7:00 pm on Thursday, Friday, and Saturday in the Algonquin Small Performance Theater. Tickets are $10 for general admission and $7 for senior citizens. Purchase at the door, or reserve yours in advance at arhstickets@gmail.com.