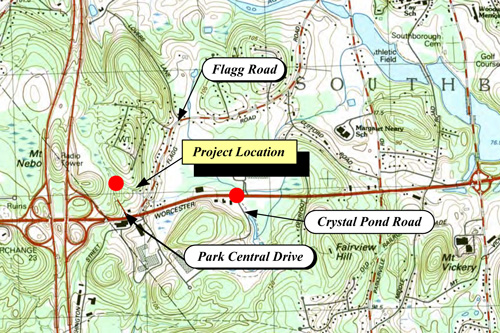 Above: The proposed 40B would be located at the intersection of Flagg Road and Route 9 (map source)

The proposal to build a 180-unit 40B complex on currently undeveloped land off Flagg Road has many neighbors sounding an alarm. Chief among residents’ concerns is the potential for increased traffic on Flagg Road as well as Route 9, but a study recently commissioned by developer Bill Depietri suggests the project will have only a minor impact on traffic in the area.

“The analysis has shown that the project will not create any new deficiencies, will have a small impact on existing locations that experience peak hour constraints, and can be safely accessed from Flagg Road,” concludes the 153-page report which you can read for yourself on the town website.

The report acknowledges the Route 9 corridor can get congested during peak travel times, but says the proposed 40B project, dubbed The Residences at Park Central, would not make the situation significantly worse, estimating an average of two or fewer car trips per minute would be added during peak times.

The access plan that was evaluated in the study includes converting the existing Park Central Drive off Route 9 into a one-way enter-only road. A new two-way access road would link the site to Flagg Road approximately 300 feet from its intersection with Route 9.

According to study estimates, the development would generate approximately 1,214 vehicle trips over the course of the day, of which 92 are anticipated to occur during the morning commute and 117 during peak evening times.

The report suggests most of the traffic leaving the development will head toward Route 9, but that any traffic going in the other direction down Flagg Road toward the schools and center of town can be handled by the existing roadways.

Drivers wanting to exit Flagg Road onto Route 9 would encounter “an expected increase in vehicle delay” at the intersection.

The study recommends improving the 300-foot section of Flagg Road between the development’s access point and Route 9, as well as installing new traffic signs along Flagg Road.

At a hearing about the project in January, the Board of Selectmen deferred its opinion on the project pending the results of the traffic study. At the meeting, Selectman Bill Boland said that while a 40B developer can come to the board looking for support, any endorsement or opposition by selectmen is “kind of a formality.” Regardless of how selectmen feel about the project, if the 40B designation is approved by Mass Housing, the developer can bring plans before the town’s Zoning Board of Appeals.

Selectmen are expected to take up the discussion again at its meeting on Tuesday, May 7. The meeting begins at 6:30 pm in the Town House Hearing Room (2nd floor), and is open to the public.

I far as I am aware, and being a longtime resident of Southborough, neither Mr. Depietri or his attorney Mr. Pezzoni have never done anything in town that truly affected anything. I am pretty darned sure that his traffic study is on the money and will cause a minimal impact on our side streets. The apartments in Marlborough high on the hill off Northborough Road have caused far more impact and nobody worries much about that.

I am reviewing the traffic study in some detail, and I am “pretty damn sure” it is not “on the money”. Perhaps you might wish to actually review the report before staking your reputation upon its merits (or lack thereof)?

First, I do not see anything in the study that acknowledges the **TOTAL** amount of traffic that would be added to Flagg Road and Deerfoot by constructing a new 2-way link from Park Central to Flagg. By “Total” , I mean:

From what I can tell, the traffic study only forecasts the additional vehicle trips brought by Mr. Depietri’s proposed 40B residential development, and not the colossal impact brought by the proposed routing of ALL Park Place egress traffic onto Flagg Rd. (i.e., “the development would generate approximately 1,214 vehicle trips over the course of the day, of which 92 are anticipated to occur during the morning commute and 117 during peak evening times.”)

Second, I find it disturbing and illuminating that Mr. Depietri’s commissioned traffic study acknowledges that nearly 2/3rd’s of the existing vehicle traffic on Flagg Rd. travels in excess of 35mph, on a road that is much more of a country lane, has no sidewalks, and where the speed limit is currently posted at 25mph.

Adding traffic only increases and exacerbates an imminent safety risk to residents. On any given day, one finds plenty of residents walking along on Flagg Rd. – (some walking with infant strollers), bicyclists, joggers, and children walking to/from the Neary and Trottier schools. Flagg Road is a narrow roadway, and does not have sidewalks. Dumping all the egress traffic from a corporate office park, Chapter 40B development, a large motel, and a convenience store onto Flagg is utterly irresponsible and foreseeable hazard to local residents.

Third, has anyone considered the crime factor, when thousands of car trips per day from a transient business environment are jettisoned bi-directionally onto the 100% residential Flagg and Deerfoot Roads? Hello?? MacFly? Buehler ???

Perhaps the efforts of Southborough’s residents to fight this would be better spent in escalating this to our state rep and state senator, as well as the MassDOT.

Fourth, I believe the Park Central parcel that Mr. Depietri owns is zoned for light industrial use. . . not residential. Does Chapter 40B override this zoning restriction?

Note that in the report it actually says 92 trips during the morning “peak hour”, not 92 for the entire the morning commute. So you’re right in that there will be more than 92 drivers heading off to work in the mornings, but they will be spread over a wider period of time.

Why not build this on the soon-to-be vacated Harvard Primate Lab property?

One reason is that Harvard still owns the land so it is up to them to do with it as they will. The also have a repository on the facility.

What I would really like to understand is – why do we even have these 40b laws on the books? Why should anyone best able to live in a town like Southborough without paying the market price? This law only benefits developers,….and I the long run, we end up developing land that may have been left open. It’s too bad, we had the opportunity to repeal these laws but it failed.

Did you read what you posted? Why should Southborough be so exclusionary and exclusive? It never used to be that way here, and it should never be. People who would like to live here should have the ability to do so……even if it’s, as you put it, “without paying the market price”. If it wasn’t for affordable housing, my son would have been forced out of town.

Not much of a capitalist are ya? I’d like to live in Brookline, you really think it would work if we all got to live where we wanted…. It’s always nice when the government handout goes your way, but don’t expect the rest of the people to be happy about it.

John, you’re mixing issues here. This issue is about the 40B process. It is not about affordable housing. Southborough should have affordable housing! But no town should be steamrolled by a development group chasing the dollar sign.

In fact, you should understand that DHCD has approved Southborough’s master plan, and also that we’re making solid progress against it (unlike most towns).

So I’m not buying the argument that there is some sort of moral obligation that we must put money in the pockets of developers.