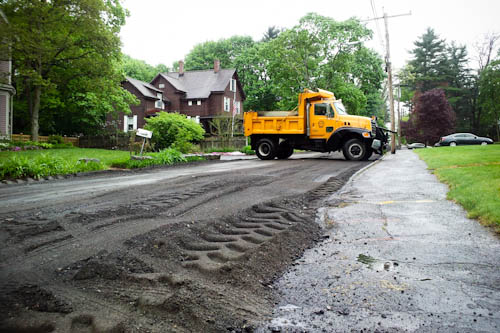 If you’ve been in downtown Southborough this week, you already know the spring paving season is underway. This week crews have been working on School Street and Latisquama Road. Both streets are currently open to local traffic only as the roadway is ripped up and replaced.

DPW Superintendent Karen Galligan said Newton Street and White Bagley Road are expected to get the repaving treatment in the next couple of weeks. Oak Hill Road, Central Street, and Northboro Road are also on the docket, but Galligan said they will likely hold off on those roadways until school is out and the buses stop running. Middle Road is also scheduled to be repaved at some point.

Some side streets, such as Learned and Grove Streets off Central Street, will also be repaved along with the main roads.

Galligan said the work, which involves grinding down the existing pavement, grading the roadway, and then repaving, can be disruptive to those who live in the area. She said the DPW sends out letters to homeowners who live on a street that will be repaved, and to those on adjoining streets, to let them know the work is taking place.