Under the best of conditions, Southborough town elections don’t seem to command much attention. Since 2000, the average voter turnout has run around 21%. But with only 5.5% of registered voters showing up at the polls on Monday, this year’s turnout was dismal even by that modest standard.

Longtime Town Clerk Paul Berry told the Metrowest Daily News he has never seen a turnout as low as this year’s. Selectman Bill Boland called the turnout “sad.” In a comment on this blog, former selectwoman Bonnie Phaneuf said the election was “an eye opener.”

The fact that there were no contested races no doubt contributed to voter apathy, but even the historic vote to expand the Board of Selectmen, an institution that has remained largely unchanged since the town’s founding 275 years ago, was not enough to motivate most voters.

Of the 6,997 registered voters in town, only 387 cast a ballot in the election. Voters were distributed fairly evenly across the town’s three precincts. You can see the full election results here.

Here’s a look at voter turnout over the past decade or so. 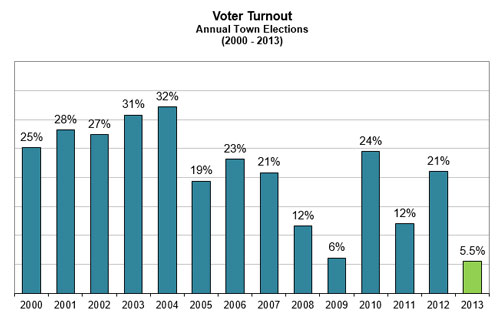 This is positively shameful. Only 387 people voted; a process that takes perhaps as much as 10 minutes — in person or absentee. Far more people than that read this blog. Shame on those of you who didn’t vote.

Although the right to vote does include the right not to exercise it, nonetheless voting is a civic responsibility. And it’s a right that people have suffered and died for.

I wonder if it would be possible to get permission to post Donna McDaniel’s piece in the 24-May-2013 edition of the Villager here.

It should be required reading for every resident, and taught in the schools every year. (Not just voting, showing up – prepared – for Town Meeting too.)

This is our town. Live up to your responsibilities. Participate!