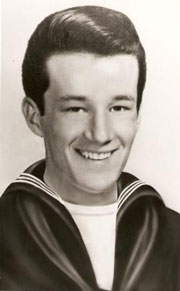 Longtime resident Alice Foley died at the age of 87 earlier this month. I didn’t know Mrs. Foley personally, but her name will be familiar to anyone who has read the list of names etched into the stone of the All Wars Memorial on Southborough’s Town Common. Mrs. Foley was the mother of Robert R. Foley, Jr., the only Southborough resident killed during the Vietnam War.

Bobby, as his family called him, was in the Quang Tri Province of South Vietnam in a patrol boat on the Cua Viet River, when the boat struck a mine on November 11 – Veteran’s Day – in 1968. Bobby was killed along with three others, Robert Barron of Ft. Worth Texas, Gary Graves of San Manuel, Arizona, and Cliff Newman of Wahiawa, Hawaii.

Bob Foley was only 20 years old, and VFW Post 3276 Commander Steve Whynot tells me he was just a few weeks away from coming home.

Bob Foley was buried in the Southborough Rural Cemetery, where he was joined by his father, Robert Foley, Sr., in 1984, and his mother Alice just last week. A bridge on Marlboro Road (Route 85) over the railroad tracks just south of the intersection with Framingham Road was named in Foley’s honor.

While not a Southborough resident at the time, Captain John Joseph Kalen was also killed in South Vietnam in a helicopter crash on September 16, 1969, just two weeks shy of his 29th birthday. Kalen lived in Milford, but his family lived in Southborough, and like Bob Foley, he is buried in the Rural Cemetery.

Thank you so much for putting this remembrance for Mrs. Foley and her brave son Robert. A wonderful family to have to deal with such tragedy. We all hear about Robert on Memorial Day and every time we cross the bridge and it is so nice to put a face to the name. As well it was so nice to see so many residents take part in the Memorial Day Ceremony.

And thank you to Steve Whynot and John Wilson also for reminding us to take a moment and remember Robert and all those from Southboro that have served and those that have given the ultimate sacrifice.