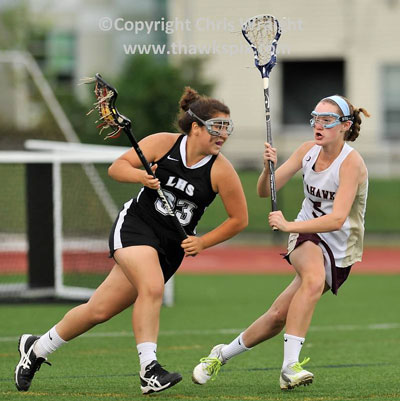 Above: Algonquin girls lacrosse was knocked out of the postseason this week by Longmeadow (photo by Chris Wraight)

The rematch did not go as Algonquin hoped. For the second year in a row, Algonquin girls lacrosse faced off against Longmeadow in the District 1 state semifinals, but unlike last year, the girls on Wednesday fell to their West Division rival.

After dominating their postseason matches, Algoqnuin found itself on the wrong side of a lopsided 16-3 game against Longmeadow. Despite the loss, Algonquin coach John Healy said he was proud of what the team had accomplished. Reports the Metrowest Daily News:

“When you get into the playoffs, only one team’s going to go home happy and that’s the state champions,” Algonquin coach John Healy said. “To win Central Mass., to go as far as we did from where we began with a lot of question marks … is phenomenal.

“If you take us from where we were in March to where we are (now), it was a great journey.”

The girls ended the season with a Central District 1 title and an impressive 18-4 record. You can read more about last night’s semifinal, and the road to get there, in this article by the MWDN.