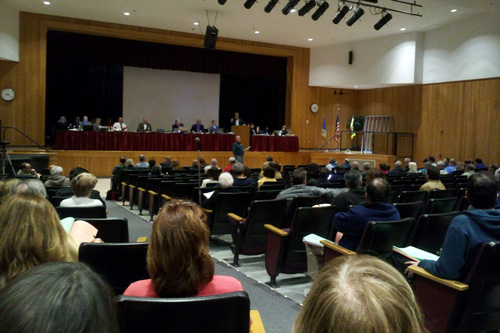 Above: There were lots of open seats at Town Meeting this year

When it comes to public participation in town government, recent numbers paint a grim picture. A mere 184 residents attended Town Meeting in April. Town elections featured not a single contested race, and only 5.5% of registered voters went to the polls despite the draw of two historic ballot measures. Currently there are 26 vacancies on town boards and committees, with some unable to meet because they do not have a quorum.

“Our participation in town government is dropping off drastically,” Selectman John Rooney said at a meeting earlier this month. “A small number of people are crafting the way this town operates.”

Rooney brought up the issue of public participation during a discussion with Southborough’s state representatives Senator Jamie Eldridge and Representative Carolyn Dykema, and asked what if anything is being done at the state level to help energize people into getting involved.

Dykema said she believes there is a bill making its way through the State House that would allow electronic voting to offer a more convenient way for some to participate, but Dykema said moving things online isn’t necessarily the solution.

While noting online discussion and debate on sites like this one and others can be a good thing, Dykema said she wonders if participation online makes it less compelling for citizens to actually attend events like Town Meeting in person.

Southborough resident Chris Robbins, who attended the board’s meeting, said encouraging participation is all about the proper marketing. A member of Southborough Rotary, Robbins said his group has turned around their declining membership by marketing the group in a way younger residents can relate to.

“There is hope on this issue,” he said.

Robbins suggested creating a handbook that would promote “what’s exciting about serving in town hall.” He said the guide should include job descriptions for all volunteer and elected positions to help encourage residents to get involved.

What do you think? Are you currently involved in town government? Why or why not? Is it a matter of time, convenience, or lack of interest? What if anything would help energize you to get more involved? Share your thoughts in the comments below.

Kids. That’s my excuse. With no break between school and summer camp we get away on long weekends whenever we can and the rest of the time we are home with the kids during the week after paying for after school programs and babysitters.

I also feel that until there is an opportunity to influence the school budget with my vote, all the rest is just a distraction.It’s not enough that we can vote for members of the committee. More than just that committee needs to be involved in the budget and salary negotiations.

You’re quite right Matthew. As far as I’m concerned, until something is done or an effective forum provided to bring the school and the unions under control, count me out. Just grin and continue to pay the ever rising property taxes. The School Committee must be in thrall to Gobron, and that’s that.

I really do believe that putting together a marketing effort will turn this around. A “town government” table could be set up at a few events; the Summer Nights end of the summer fireworks (August 24) and Heritage Day (October). Maybe draw people with a raffle….set up a dunking booth (August only please)… I’d be willing to work with others on this if people think it’s a good idea.

I think voter turn out is directly related to voter cynicism of our elected officials. When an elected official says one thing to get your vote and then does another, and then gets reelected time and again, then I am sure voters think their time is better spent at home.

To that point, maybe Ms. Dykema can tell us how her transparency in government bill is coming along (HD 3412).

This is a subject near and dear to my heart, as anyone who knows me and/or has read my columns in the Villager will recognize. Before elections and Town Meetings I remind people that thousands have died for our right to vote and govern ourselves..It is pretty depressing to see the lack of contests and disgraceful voter turnout.

Regarding having somethng to enable people to understand what the boards and committees do, quite a while ago I excerpted sections of a citizens’ handbook I have drafted which does just that–describes committees, their responsibilities, whether elected or appointed, etc. I have been updating it and would be happy to work with a group who will be willing to assist with this kind of project i(such as finding ways to distribute, etc.).

The thought of maybe 600 new residents over the next years (if both Park Central joins Madison Place at the west of town) means we will have hundreds of residents quite isolated from other neighborhoods and closer to Westboro than to Southborough. But in the end, we need their civic participation if we are to be a community. I’ll be writing more about this future columns. I’m pursuing some ideas for how to inform them about their new town which would fit right in with trying to educate the people already here.

Donna,
Those that died fought not just for our right to vote but for our right not to vote too. Protest is the most sincere form of patriotism and to bring it all home I quote the Michael Douglas movie “American President”…”Then the symbol of your country can’t just be a flag; the symbol also has to be one of its citizens exercising his right to burn that flag in protest.”
I will not vote until my vote matters, and in Southborough with our taxes as high as they are driven overwhelmingly by the school budget, I have to ask when my vote will ever have it’s day.

Love the idea of the citizens handbook.
Could it be ready to hand out to those 600 to the west? Often new arrivals to a region know more about their new home than it’s natives, much like the people who earn their citizenship knowing more about our country and our history than those that inherit.

I think there are some things that could be done to increase participation but there is tremendous institutional inertia to be overcome.

Sat town meeting should at least be tried. It might be successful and it might not but it should be tried. The “school night” argument is pretty compelling reason not to participate.

Real Budget Choice – If we are honest with ourselves, the budget is negotiated among about 10-20 people. Our budget process lacks transparency, roles and responsibilities are poorly defined if at all and those that are defined are regularly ignored. The end result is a budget that is, for all intents and purposes, a “fait accompli” to be rubber stamped by Town Meeting. The barriers to mounting an effective alternative are substantial. We need to find a way to give Town Meeting participants a real choice (eg budget A or B) that will lead to a debate which in turn would drive attendance. If we had a real choice of 2 different school budgets that had a meaningful difference in our taxes I think you would see an overflow at town meeting.

Having contested positions would be a plus as would informing the public that there was an election. I believe we do a very very poor job of informing the public. We have a couple of sandwich boards that sit at intersections but that is it. How about 5 or 10 banners strung across 30, 85, Central, Oak Hill, ect.

Econ 101. To get people involved, the cost of the time it takes to participate has to be less than or equal to the benefit gained by participation. So, it’s simple, we need to make the time smaller and/or the benefits greater!

I’ll first start by agreeing with Matthew that kids are a reasonable first line excuse, but without kids would I participate in any way? probably not. It’s not for a lack of interest, I have opinions on a lot of the issues, and I think it’s important for the majority to get their way, but it boils down to math. The ave. household tax is sboro is almost 9k and 2/3 is schools, so we are debating how to spend 3k and really at any given time only 10% or so is up for debate. For the 300 bucks of that I *might* have some influence over, I’ll pass.

The time cost analysis gets even worse as you start talking about the influence that one can have on the various boards and committees.

Which leads to the real reason no one goes to Town Meeting…. someone has to say it, Town Meeting is dumb, it simply takes way too long. Ms. Dykema has it wrong, the reason to have electronic voting IS so that the people don’t have to attend town meeting in person. The proof is even in Susan’s live blog, just read the last few posts… “We’re cruising now”, “and on we go”, “we are officially adjourned and I’m going home!” It took a half hour just to get to article 1. Town Meeting has it’s benefits, it allows debate and amendments, but 90+% have their minds made up before they walk through the doors and the sitting through the debate over mundane issues is the major attendance deterrent. Finally, I would guess that Saturdays are even more valuable to people than school nights, they are to me.

How should it work? by decreasing the time it takes to participate! Every article should be written up like the state ballot questions are, and you submit your vote. This could be done online or not, but you’ll definitely get more than 2% voting and I would expect online to be even higher.

Lastly, Al is right that even the simple ballot voting solution my not be the total solution. Making the benefit greater is possible too. Many of the articles aren’t all that interesting. What are we gonna do not pass the budgets? then what? The way some of the articles are written clearly could change as well. But on the other hand, having the 10-20 most vested people negotiate the budget makes sense. The rubber stamping is a nice simple check and balance on the process.

PS – To even discuss this year’s voter turnout is pointless, with no contested races, it’s not really a vote is it? I’m surprised anyone went.

I’m in agreement with SB Resident. Most people are content with the way the town runs and are happy that a couple of dozen well-intentioned folks get involved and stay involved. When something very controversial comes up ( remember the push for Southboro High School?? ) the citizens come out in droves. The majority of the budget is virtually fixed. Any significant activism is aimed at what will be a rather small percent of their homeowners tax bill.