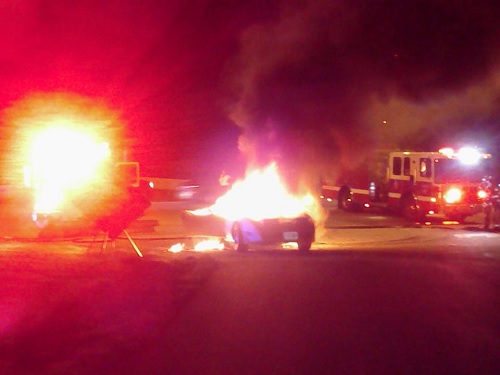 There were some big stories in Southborough over the weekend. Here are the highlights.

Last night, Southborough News broke on Facebook that Southborough Fire Department was responding to smoke at Trottier Middle School. Thankfully, the small fire was quickly extinguished. Firefighters remained for hours to evacuate smoke from the building.

While the crew was dealing with the situation, they called in local support to cover Southborough in case of other emergencies. Marlborough sent over an engine.

At approximately 11:00 pm last night,  Principal Keith Lavoi emailed parents that there was a small fire in the chorus room. “There is smoke damage, but it is not extensive.” School resumed today without any schedule changes.

Telegram & Gazette reports that Southborough Police Dept has kept drugs in evidence dating back as far as 1992. Gazette claims that Southborough’s stockpiling of 745 seized items is “an unusual practice that has raised suspicion that drugs could be missing or at risk of theft.” T&G referred to other towns’ procedures for regularly destroying such evidence.

T&G’s investigation appeared to be based on complaints made by former officer Michael M. Crenshaw. Crenshaw has previously been in the news with other complaints made about SPD’s procedures. For the full T&G story, click here.

This weekend, Southborough Police Department shared on their facebook page:

[Friday, June 21st] at approximately 10:46 pm, Southborough Police and Southborough Fire responded to Turnpike Road (Rt. 9 East) at Middle Road to investigate a motorist’s report of a car on fire. SPD officers were first on scene, and reported back that the vehicle was fully engulfed. The driver was able to escape the vehicle, before the fire became out of control. Southborough Police directed traffic around the scene, while SFD worked on putting the fire out. The fire was extinguished shortly after SFD’s arrival to the scene. The cause of the fire is still under investigation at this time.

Update on Trottier fire (6/24/13 1:48 pm): The fire department confirmed that firefighters discovered an overheated electronic keyboard in the chorus room. It was quickly extinguished with dry chemicals and no damage was sustained to the school. The cause is still officially under investigation.

Update on Police story (3/24/15 11:20 am): Removed an error linking Crenshaw with a story about another officer.

21 years worth of confiscated drugs kept in the Police Station!! Tragic that it takes a newspaper story to finally get some corrective action. Any other issues raised years ago by former officer Crenshaw that were never checked out?

Please, even after they learned a sex offender was living next to a preschool, it took a concerned citizen and an article in the paper to get them to do something about that as well. With the evidence room, the sex offender and the other charges made, the finger pointing and lack of accountability needs to stop before this costs hundreds of thousands in lawyers fees and lawsuits on behalf of the taxpayers. This town needs more oversight and transparency…and corrective action. Now!