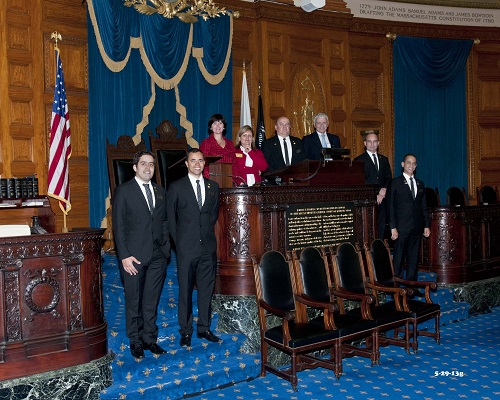 Above: Representative Carolyn Dykema and members of the Rotary International Team representing Brazil and Southborough (photo provided by the Southborough Rotary Club)

Our state representatives, Carolyn Dykema in the House and Jamie Eldridge in the Senate, sent out seven press releases in May and June to update constituents on the goings-on in Boston.

Here’s a round-up of the announcements.

Representative Dykema Participates Lyme Disease Awareness Day (5/3/13)
Representative Carolyn Dykema joined with colleagues in the State House and Lyme disease advocates to recognize Lyme Disease Awareness Day at the State House earlier this week. Legislators, exhibitors and disease advocates were on hand for the day-long forum that sought to raise awareness about the disease and prevention methods. (read more)

Joint Committee On Housing Advances $1.4 Billion Housing Bond Bill (5/15/13)
The Joint Committee on Housing yesterday advanced a $1.4 billion housing bond bill that would provide additional authorization for essential housing production and programs for low-income and moderate-income residents in all regions of the Commonwealth. “I am pleased to work with the Patrick-Murray Administration to continue sustaining bond-funded housing programs for Massachusetts families for generations to come,” said Senator Eldridge. (read more)

Dykema Supports Bipartisan Legislation to Move 17-Year-Olds into Juvenile Justice System (5/29/13)
Representative Carolyn Dykema joined her colleagues in the Massachusetts House of Representatives last week to unanimously support bipartisan legislation increasing the age of juvenile jurisdiction from the 17th birthday to the 18th birthday. Massachusetts is one of only 11 states in which 17-year-olds are automatically prosecuted as adults. (read more)

Senator Eldridge Announces Help4OK Challenge For National Day Of Civic Hacking (5/31/13)
Senator Eldridge will join federal government departments, agencies and other national partners to take part in a National Day of Civic Hacking this weekend as cities across the nation band together to promote transparency, participation and collaboration among government, startups and citizens. The Help4OK project proposed by Senator Eldridge will build on local efforts for crisis management response based on a website for Oklahoma tornado victims to connect victims in need of food, shelter, medical supplies and other emergency resources. (read more)

A “Yes” vote is for the tax hikes. A “No” vote is against them.
State Rep. Carolyn Dykema, voted yes.
State Sen. James Eldridge voted yes.

Provisions include a 3-cent-per-gallon hike in the state’s current 21-cent-per-gallon gas tax, which, beginning in 2015, would also be indexed to inflation. Other provisions include a $1 hike in the current $2.51-per-package cigarette tax, an increase in the tax on cigars and smokeless tobacco, a change in the way utilities are classified for tax purposes, and the reinstatement of tolls at exits 1 through 6 on the Massachusetts Turnpike in Western Massachusetts. The legislation also imposes a new 6.25 percent sales tax on computer system design services as well as services to modify prewritten software.

What a shock that press releases from our Democrat representatives would not mention tax increases. Rest assured that most of the voting public does not seem to care (check recent elections) and that most of the money raised with these new taxes will be spent elsewhere then improved roads and bridges.

An additional easy bets are there will be no EBT card reform which could save the taxpayers millions and improved transparency in government will go no where.

All is well in the Common Wealth. I am off rereading the Declaration of Independence and the Gettysburg Address.

Thanks Frank and Dean,

If you smoke, drive a car and double whammy, use the mass turnpike, you get to pay more than your “fair share” of taxes to the commonwealth of massachusetts.

Fair share is an income tax, not whacking a minority who cannot defend themselves.

But realize here that Patrick rejected these increases as not enough….he wants more.

Happy Fourth of July to all!

I wanted to provide you with a copy of my district newsletter which includes more information on the issues mentioned by previous commenters.

Keeping residents informed is an important part of my job. I welcome your questions and comments.

If you’d like to receive newsletter updates by email, please forward your email address to my office at Carolyn.dykema@mahouse.gov. The newsletter and other legislative updates can also be found on my Facebook page. If you ever have questions about votes or initiatives at the State House, you are also welcome and encouraged to contact me by email or phone at 617-722-2210.