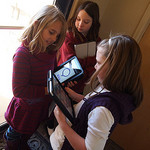 Some residents have raised questions about the legality of the proposed Neary 1:1 iPad Pilot.

In anonymous comments on this blog, parents shared the news that the Department of Education was investigating a complaint about the pilot. The Metrowest Daily News looked into the DOE’s findings.

The Metrowest Daily News spoke to the DOE and school officials. While they confirmed the matter is under investigation, a final ruling has not yet been made:

Prefacing his remarks by restricting them to a general situation, Massachusetts Department of Elementary and Secondary Education Deputy Commissioner Jeff Wulfson said a program in which some students were doing homework on iPads and others weren’t wouldn’t likely be legal.

Wulfson confirmed that his office is looking into some concerns regarding the legality of Southborough’s proposal after receiving complaints from parents. He said the department is still gathering facts and hasn’t reached any conclusions.

The DOE indicated that it would need to wait for the school to finalize their official plan before making its decision. Superintendent Dr. Charles Gobron explained to MWDN and the DOE that the October 25th plan was just a draft.

As previously reported, part of that final plan hinges on the results of the survey released to parents on Monday. Parents are asked to make their comments by 8pm this Thursday, November 7th. The school needs this information to determine how many parents plan to opt in or out. If too many oppose the pilot, the school will have to reassess the program.

Before finalizing a plan for a 1:1 pilot, the school would check in with the DOE. MWDN quotes Gobron:

“We agreed that before we implement anything, I will send everything them to be vetted,” he said. “We can’t do anything illegal because we haven’t implemented anything yet.”

To read more, see the links below:

I have to admit that I’m a little confused. Ms. Murdock says that iPads will not be needed to complete homework, however the revised FAQ sheet states that homework will be a mix of pencil & paper and iPad assignments.

The documents have been revised for the purpose of a legal loophole. If they wordsmith the documents presented thus far so that it appears that homework is structured in a way that does not “require” kids to use an iPad to do their homework, they do not need to offer the option of providing the iPads for at-home use.

But if projects are done on the iPad, & cannot be saved via Google Drive and the students expected to work on them outside of school, surely iPads will need to be supplied to all students? And what about making parents “true partners” in their student’s education by allowing them to be involved in projects on iPads after school hours? Will arrangements be made to move these projects to another device so that parents can still be involved?

My simple question is, “How can we vote on opting in/out until the plan is finalized?” The survey doesn’t accurately address the issue. The current options assume the program as drafted is legal – what if it isn’t??

If the program is not legal the questions need to be:

I must admit that when I first heard about the program about 1.5 – 2 months ago I thought that the poor communication was simply an error/ignorance on part of the school. However, I am now starting to get the feeling that this is being done on purpose in order to get the program started. Honestly, how can we be expected to purchase an iPad a week from now when we don’t even know if this purchase is required?

I have heard that the school is now trying to state that there is no homework, but they also claim that the benefit of the iPad is that work can be started at school and finished at home (stated in the program draft). Which one is it? My understanding is that as soon as work is not able to be finished in class and is completed at home then the iPad needs to be supplied at home to all students (I’m not claiming that this statement is correct, but it is what I believe to be correct).

Just in case it was missed in the last round of comments, my son’s private school already went through the ipad craze. A year later I have a very expensive Angry Birds/reader device (aka iPad) and a new MAC. This year the school said the iPads were insufficient. They didn’t teach proper keyboarding due to the size, memory wasn’t strong enough, the sped apps (e.g. dragon dictate) do not work well on the iPad – they work much better on the MAC, the iPad didn’t have appropriate parental controls, etc., etc. It was a very expensive mistake in my opinion. I love technology. I love the idea of all of our kids exceeding our skill sets. I just hate it when I see schools adopt the “bleeding” edge instead of the “leading” edge of new offerings.

0
I would love an ipad

From the Metrowest Daily News article-

Whether this iteration makes it or not, Wulfson said he sees all districts having “1-to-1” programs in place within the next five years.
“Everyone (then) will wonder what the big fuss was about,” he said.

How many of the 4th graders already have ipads, ipods, itouches and iphones at home anyway? What’s wrong with screen time in the pursuit of knowledge?

When I was growing up my parents were concerned about me being a “bookworm” because I read so much – my grandmother thought I was “going to ruin my eyes” and I was told to go outside and play with my friends… too much worrying for nothing. With everything balance is key – I don’t see much difference between reading in a book or on an electronic device. We already use so much technology in our day to day lives – why not in our schools? I think as parents we are really dating ourselves when we get all nostalgic about things like cursive handwriting and such…

As far as paying for the ipads, maybe the school system will pick up the tab or maybe not. In a Globe West article from Sunday about Medfield’s ipad program -state guidelines say districts can “encourage” students to buy the devices and the state also advises schools to “provide devices for students whose families won’t or can’t buy them.”

You guys are still reading way too much into the details. This is a PILOT. The reason for calling this a PILOT is to work out all these details so that they can create a valid, working, and legal plan. I think the school has made it clear that they will only implement a plan that is legal and that there will be no homework that requires the iPad.

The concern here comes from the fact that we are being required to pay for it. Once you tack that on, the instinct is that we want the value to be proven to us, but a PILOT isn’t something that is very salable because by definition flaws are expected and the value isn’t proven.

The reality is you either support the concept and trust the teachers to do their best and you think that the cost of the iPad is still worth it even in this PILOT format, or you don’t. Trying to poke holes in a plan that by definition is supposed to have holes is silly.

Fair point, however, if iPad homework is not going to be assigned, why have a take-home component to the program at all? I thought that one of the selling points for the district was the fact that a student’s work would be accessible to him/her on a 24/7 basis. Perhaps the program goal/vision will need to be revised. Also, the principal apparently said that there will be no iPad homework assigned, but the revised FAQ sheet, per the MWDN, says there will. It seems that quite a few issues still need to be ironed out, which is somewhat surprising if this has been in the works for almost 2 years. Considering how soon the proposed start date of the pilot is, I’m surprised how many potential problems appear to have been overlooked.

And yes, this is considered by the district to be a pilot program, however all students in the grade are required to have an iPad, not just a sample of 4th graders. It appears to me that if the goal is to include the whole grade, the district will be willing to take steps to make sure that this happens.

Absolutely. It is true that it is a “pilot” program, but it if every family (all the 4th grade parents) is required to purchase an iPad for it, I hardly consider that fair. Some people simply cannot afford it. I don’t believe people are “reading way too much into” THOSE details.