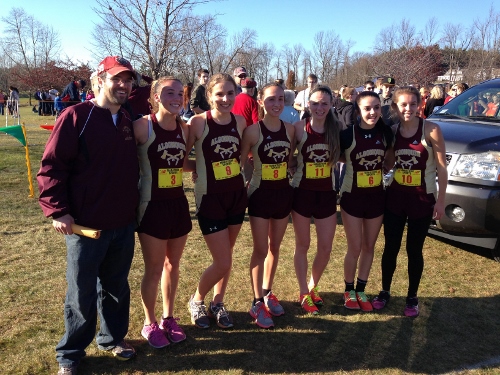 No state glory for Algonquin this fall.

ARHS’ Girls Cross Country can boast having made it to the state championship competition this Saturday. But the journey ended there when the team placed last out of 19.

Coach Brian Kellett shared his recap of their season:

The Algonquin Girls Cross Country Team advanced to and participated in the the Division 1 State Championship Race as a team for the first time in 4 years by placing 3rd out of 20 teams in the Central Massachusetts Division 1 Championship.

The team’s success in the District championship capped off a season with a 5-2 record that included a 2nd place finish in the Midland A League. Megan Walsh, Kyra Shreeve, and Kendyl Finelli were all named league all stars.

The team was led this season by captains Shreeve, Walsh, Stephanie Fox, and Maddie Partridge. Running for Algonquin in the District and State Championships were Walsh, Shreeve, and Finelli, as well as Alexandria Madamba, Amanda Pageau, Laura Sacco, and Kelly Wendt.

That leaves Football as the last fall varsity sport still going. They lost again Friday night, 56-21 at Watchusett. Now their final game will be next week’s Thanksgiving Day Classic, 10:15 am on their home field.

The  Tomahawks will be looking to repeat last year’s win over Westborough. Both teams will fight to end on a high note after lackluster seasons with matching 2-8 records.

I don’t know why cheerleading never gets mentioned here. Yesterday Algonquin’s varsity cheerleaders finished second in their regional tournament. They qualified to move onto states and will be competing at the state finals next Sunday at Wachusett HIgh School. This is the first time they have made it to states since 2005. The girls have been working hard and it paid off yesterday.

Congrats to cheerleading. I do want to follow up on that. And your question is a good one. The answer is that comes down to lack of other external coverage by the school and the Massachusetts Interscholastic Athletic Association. And your comment is the first news anyone has shared with me directly about the squad.

I have two main sources for Algonquin sports info. The schedule comes from ARHS’ athletic department website. Cheerleading is not listed as a sport on their site.

For postseason tournaments, I rely on MIAA for the brackets, schedule and score. It also doesn’t list cheerleading competitions.

I assume that this dates back to cheerleading’s origin as entertainment to cheer the “real” sports teams on. Obviously over time, cheerleading has developed into a sport of its own. But as long as the school and state association don’t report on it as one, I’m in the dark.