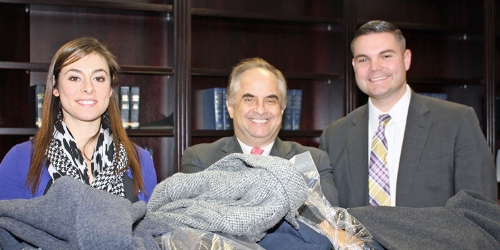 Above, left to right: Pollack Law Group attorneys Irena Inman, Irwin Pollack and David Callahan with some of the nearly 60 winter coats and jackets they collected for the Keep a Family Warm program (Submitted photo)

Last week was a fairly slow news week. But I was even slower in posting stories as I focused on time with my family. Which leaves me a bit backed up. So I’ll be posting a few roundups this week to help us get caught up.

I’m starting with news from our business community. Most of the following are announcements that town businesses asked me to share with you.

(There’s also one story that wasn’t proudly touted by the business, Harvard’s primate center, but was eagerly covered by local media.)

Athletic Revolution Metro West, the fastest growing fitness franchise tailored specifically for children, teenagers and young athletes, is pleased to announce it is opening for business on 40 Southville Rd, Southborough, MA. They are scheduled to open their doors January 2, 2013. . .

To celebrate its grand opening, Athletic Revolution Metro West is offering 50% discounts off a first month’s membership and waiving the enrollment fee for new members. . .

Facility tours will be available during the grand opening celebration. Membership information is available at the facility, by calling 201-317-1694, or by visiting www.AthleticRevolutionMetroWest.com. (read more)

UNDER THE TUSCAN SUN, January 18, 6:00 pm, Southborough House of Pizza

Local realtor donating $1k from every home she lists & sells January through May 2014 to Children’s Hospital, Boston

The funds raised will help pay the medical costs of patients whose families cannot afford care. Purchase essential medical equipment, support pediatric research, and provide training for the next generation of pediatricians.

To support this fundraising effort and the kids at Boston Children’s through Maria’s event Real Estate for Children’s, home sellers don’t have to do anything they weren’t going to do anyway. If a homeowner is considering selling their home, please contact Maria via email at maria.vagnini01@gmail.com or call (617) 640-1400 to schedule a Competitive Market Analysis. (read more)

Dozens of local children and adults will be a little warmer this winter thanks to a coat drive sponsored by the Pollack Law Group, P.C., where employees collected nearly 60 “gently-used” coats and jackets for the Keep a Family Warm program sponsored by Project Just Because.

“No one should be left out in the cold this winter,” said Attorney Irwin M. Pollack, founder of the Pollack Law Group, P.C., at 304 Turnpike Road, Southborough. “We’re proud to be able to help Project Just Because in its efforts to help keep families warm.”. . .

Karen Regan, operations manager for [Project Just Because], was thrilled to receive the donation, noting that the agency ran out of its supply of warm coats weeks ago. “Without a doubt, there’s a large need,” she said. “… These coats are all going to be gone in no time.” (read more)

Globoforce®, a leading provider of social recognition solutions, today announced it won the Overall Operational Innovation Award at Ventana Research’s 2013 Technology Innovation Awards ceremony. The award, which recognizes a technology that has a substantial impact on organizations’ operational efficiency and effectiveness, was given to Globoforce for its global, SaaS-based HR software. . .

The U.S. Department of Agriculture has fined Harvard Medical School $24,036 for violations of the Animal Welfare Act at the university’s Southborough primate research facility, the department announced today.

According to an announcement from the USDA Animal and Plant Health Inspection Service, the fine was levied as a result of 11 violations from February 2011 to July 2012.

Meanwhile, an animal rights group that has frequently protested the center and criticized its operations called the fine “paltry” and said the punishment should have been far more severe. (read more)