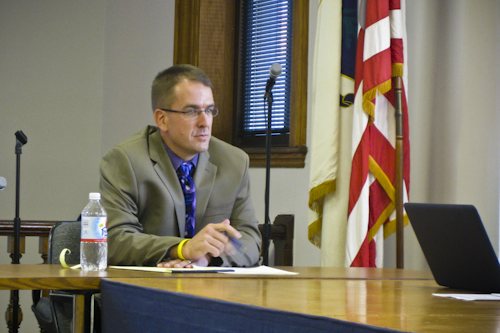 Above:  Town Administrator Mark Purple at a 2012 Board of Selectman meeting. In his first annual review, Selectman universally praised his performance. (photo by Susan Fitzgerald)

I missed posting a few stories that came out of Town Hall over the holidays. So here’s another roundup.

Seeking Conservation Commissioner – apply by January 31 – from town website:
The Southborough Conservation Commission has an opening to complete the remainder of a 3 year term expiring in June, 2015. Duties include: Reviewing technical permit applications and engineering plans to ensure compliance with the Wetlands Protection Act, the Rivers Protection Act, the Southborough Wetlands Bylaw, and the stormwater and Erosion Control Bylaw. Ideal applicants will have expertise, interest and/or experience in conservation, environmental protec tion or relevant aspects of land use planning. (read more)

“I had high expectations, and Mark has certainly met and exceeded them,” Selectmen Vice Chairman Bill Boland said. The third-term selectman called the fiscal 2014 budget process the best budget experience he’s had on the board. . .

They also praised his preparation of the budget, noting this was the first year in recent memory that Town Meeting ended in one night. (read more)

Until recently, the Town of Southborough did not have a public access corporation. As a result, the availability of training for residents and students was lacking, as was modern equipment and a facility to produce programming. To remedy this, the Board of Selectmen approved the creation of Southborough Media Access in April, 2013. On December 17, 2013, the Board of Selectmen, after a review of the corporation’s structure and objectives, approved the transfer of the subscription fees to SAM to enable it to develop a first class PEG production program for Southborough. (read more)

The board unanimously appointed internal candidate John Parent to take over the department from Phil Rinehart, who will retire at the end of this month. (read more)