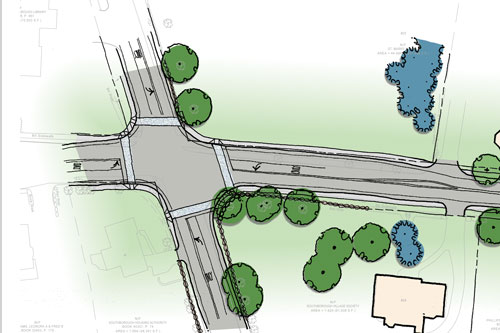 Above: A Main Street project rendering of the intersection of Route 30 and Route 85 in the future. It is a project that a citizen’s petition is looking to reassess.

The Planning Board will meet on Monday night to discuss 9 warrant articles for the Annual Town Meeting. Two are old ones mired in controversy: Medical Marijuana and Barn Hollow Open Space Acceptance. These were both tabled at the Special Town Meeting in October. The goal was to seek some consensus on the controversial items prior to ATM. That work is still in process.

Four new articles have popped up this winter related to a citizen effort to reassess the Main Street project and burying/moving utility wires. Two are potential Planning Board articles and two are Citizen Petition driven.

So what are these Main Street articles?

At the last Planning Board meeting, Town Planner Jennifer Burney explained that the related Planning Board articles are placeholders on the warrant. The Board had yet to vote on, or even discuss those articles.

Burney drafted the articles on advice from the Town Administrator’s office. She said that if the town decides to bury any utility wires, there are bylaw revisions that need to be made.

But some of you may recall that in 2012, selectmen voted not to bury utility wires as part of the Main Street project. They said the town couldn’t afford the estimated $8M price tag.

So where is this concern coming from? It’s a result of citizen’s petitions on the issue.

Former Selectman David Parry has submitted two citizen’s petitions to revisit the project. He recently called me to clarify his intent.

Parry insists that the majority of residents have no idea what’s in store with the project. In exchange for state funding, the town had to accept conditions it didn’t want. Those conditions include wide paved shoulders.

Parry says that the width of roads exceeds anything that makes sense. He claims that his calculations show that the amount of earth that will need to be removed will have the area tied up for years.

Many are aware that an historic stone wall will need to be moved. But he believes people don’t realize what the end result after widened pavement and removal of trees lining the street will be.

He believes the town should have an accurate rendering of the project made to allow people to understand the major changes to the face of Southborough scheduled for FY2017.

He hopes that Town Meeting will vote in a committee to reasses the project details. As part of that, he also wants to revisit burying utilities.

Parry proposed a possible compromise between burying all the Main Street wires and keeping all the poles. He said that some towns have combined buried wires and relocating poles behind buildings to keep them out of a main street area.

At a recent Planning Board Meeting, Parry also said that many downtown business owners are upset that the current project ends at Park Street. The businesses would like to see their stretch of downtown improved as well.

He is asking for a committee to review these ideas among others. He is also looking for $15,000 to fund their work.

ARTI CLE 29: To see if the Town of Southborough will vote to create a Special Committee, the “Main Street Reconstruction Review Committee”, for the purpose of assessing whether the current Main Street reconstruction proposal is in the best interests of the Town, and to report on its findings and recommendations. The Committee shall consist of nine members to be appointed by the Moderator. Town departments shall cooperate with the Committee by providing copies of, and access to, all records of the currently proposed plan, and such other assistance as is appropriate. The Committee shall report its findings and recommendations to the next Annual Town Meeting, and may also provide such report to other boards, committees and agencies.

ARTICLE 30: To see if the Town of Southborough will vote to raise and appropriate the sum of $15,000 to fund the work of the Main Street Street Reconstruction Committee, or do anything in relation thereto.

Monday’s Planning Board discussion is slated as a “working session”, not public hearing, on the articles.

The other articles listed for discussion are:

In January, the Board stated that they will hold future public hearings on all of their sponsored articles as well as relevant citizen petition articles.