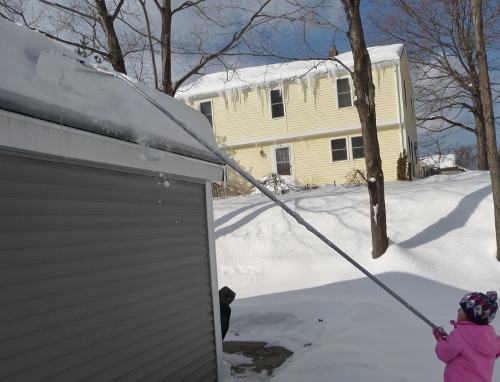 Above: Break out the roof rakes. It’s time to take care of the heavy snow on any vulnerable roofs. (Photo by Joao Melo)

They say “Be careful what you wish for”, and I suppose I technically asked for it.

Yes, I complained that I was getting sick of the snow. That doesn’t mean I wanted rain or freezing rain, especially when we have so much snow still on the ground. But mother nature has a sense of humor.

Southborough Emergency Management has issued an alert about all of the potential risks related to the changing weather.

In it, they encourage residents to be prepared for flooding basements. To reduce risk, clear your home and street drainage sytems. They also advise to avoid roof collapse and ice dam damage by removing heavy snow on roofs (especially old or flat ones.):

Our eventful winter is due to continue and create more headaches.

Freezing Rain:
The NWS has issues an Advisory for Freezing Rain from 9pm tonight thru 10am Friday. There is a potential for dangerous travel on untreated surfaces (roads & sidewalks). This will be compounded by the extreme national shortage of salt especially at the local & private levels.

Temperatures:
Temperatures will be enjoyable for the next few days, but this does not come without issues. The temperatures will cause the snow pack to liquefy and condense, but certainly not melt way. The result will be increased weight of existing snow pack and street & basement flooding from clogged drains and frozen ground (unable to absorbed the water). Everyone should take advantage of the warm temps to clear street and home drainage systems.

Rain:
The Friday storm may start as snow or freezing rain but change to all rain in all locations. Rain may be heavy at times, which will additionally add to the weight of the existing snow back and increased street & basement flooding. Anyone who has ANY potential for basement flooding (Think back to March 2005) should raise storage before Friday. Additionally, be safe and call 9-1-1 if water rises above the pilot flame of any heating unit or effects electrical systems.

Cold:
Next week we will again experience artic temperatures. Beyond being a health hazard, this cold blast will solidify any snow pack – basically into concrete. Any snow pack not moved this weekend will be very difficult if not impossible to move next week.

Storms:
The long range forecast is tracking two storms for next week, these are far out but the way this winter has been its highly likely they will make some level of impact on our region.

Roof Hazards:
Obviously the increased weight noted above will increase the potential of roof damage or (near) collapsed roofs, especially older and flat roofs. The region has already had several reported collapses. With the continued melting and re-freezing ice dams on roofs will continue to grow. These will create dangerous icicles and increased potential of water seeping underneath roof shingles, thus resulting in interior water damage. It is recommended to clear roofs as best and as safely as possible – hiring a professional is highly recommended.

A little hard work now will save a lot of damage and aggravation later.

Below is some more [information from James Arnold, a regional weather specialist.]

Neal also shared the following notice from a weather specialist. It includes a National Weather Service alert and an explanation of the difficult nature of freezing rain:

The National Weather Service has issued a “Winter Weather Advisory” for a period of freezing rain from late tonight into early tomorrow morning. Their 10:30 A.M. updated forecast discussion is below, with a few editorial changes for ease of reading:

“EXPECT PRECIPITATION TO DEVELOP ACROSS THE WESTERN ZONES BETWEEN 7 AND 10 PM TONIGHT AND EXPAND NORTHEASTWARD QUICKLY. THIS WILL ALSO BRING A SIGNIFICANT WARM LAYER INTO THE REGION FROM THE SOUTH AT HIGHER LEVELS OF THE ATMOSPHERE. TEMPERATURES LOOK TO BE WARM ENOUGH AT THE ONSET FOR PRECIPITATION TO FALL AS RAIN. HOWEVER…SURFACE TEMPERATURES WILL DROP THROUGH THE NIGHT…RESULTING IN A CHANGE TO A VARIETY OF PRECIPITATION TYPES FOR MUCH OF THE AREA. EXPECT A PERIOD OF SNOW OR RAIN MIXED WITH SNOW FOR SOUTHERN NEW HAMPSHIRE BEFORE A CHANGE TO FREEZING RAIN AS THE WARM LAYER REACHES THAT FAR NORTH. AN HOUR OR TWO OF SLEET MIXED IN WITH RAIN/SNOW IS POSSIBLE NORTH OF ROUTE 2 BUT SOUTH OF THE MA/NH BORDER. ELSEWHERE A CHANGE TO FREEZING RAIN IS EXPECTED. AM MOST CONFIDENT IN THIS CHANGE ROUGHLY WEST OF 495 AND NORTH OF THE MASS PIKE. HOWEVER…FREEZING RAIN IS ALSO POSSIBLE ACROSS NORTHERN CT…PARTS OF NORTHERN RI…AND AREAS OF MA BACK TO THE 95 CORRIDOR. THIS IS ALL DEPENDENT ON HOW QUICKLY TEMPERATURES FALL AT THE SURFACE. IF TEMPERATURES REMAIN ABOVE FREEZING AT THE SURFACE… THEN PRECIPITATION WILL REMAIN AS RAIN IN THESE AREAS. IF THEY DON/T THEN FREEZING RAIN WILL OCCUR. HAVE ISSUED WINTER WEATHER ADVISORIES FOR SOUTHERN NEW HAMPSHIRE AND ALL OF MASSACHUSETTS ROUGHLY WEST OF 495. ADVISORIES MAY BE NECESSARY OUTSIDE OF THIS AREA…BUT WITH THE UNCERTAINTY IN THE SURFACE TEMPERATURES…WILL ALLOW THE DAY SHIFT TO TAKE ANOTHER LOOK.”

Meteorology 101 and experience says that freezing rain is the hardest form of precipitation to predict. What is needed is a layer of warm air at the mid to high levels of the atmosphere and freezing or below conditions near the ground surface. Precipitation begins to fall as snow at high levels, encounters the layer of warm air and melts to become rain. Near the surface of the ground the rain encounters a thin layer of temperatures at freezing or below, causing the rain to become supercooled and freeze on contact with surfaces. Freezing rain can also occur with surface temperatures a bit above freezing if the recent temperatures have been cold enough to chill pavements etc. to levels below freezing, which also causes the rain to freeze on contact. I think temperatures will fall back to near or below freezing tonight, raising the potential for a glazing of ice in our area from late tonight into early tomorrow morning. The graphic below illustrates this process.

Friday will see warming temperatures and rain, some of which will be heavy with even the chance of thunder during the day. Urban and street flooding is likely due in part to drainage systems being clogged with snow and being unable to handle the volume of water from the heavy rain and rapidly melting snow. Mild temperatures will be with us throughout the weekend. Colder weather and more storminess likely in the form of snow is on tap for next week. More on that as it draws nearer.