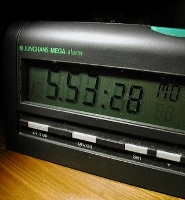 (Image cropped from photo posted to Flickr by Nico Kaiser)

Based on what she found, the APTO is supporting her committee’s work to address the problem. The goal is to shift schedules so ARHS students can sleep later in the morning.

To do this, the committee is looking for parents to help develop a workable proposal. (Click here to learn how to get involved.)

Hamaker studied published research on teen sleep deprivation and looked at how other schools in state have begun to address it. (Click here for her detailed written report.)

As a mother, Hamaker is concerned about the impact that reduced sleep has on teens:

the consequences of too little sleep substantially interfere not only with academic performance, but raise a host of other health problems.

Hamaker says that our district’s informal survey found ARHS teens are getting an average of only 3-4 hours sleep per night.

That figure isn’t statistically validated. But simple math shows that many ARHS teens are restricted to 2+ hours less sleep per day than their bodies need.

A few years ago, I heard about the dangers of inexperienced teens driving while tired due to poor reaction times. Now, Hamaker has woken me up to other serious impacts of teen fatigue.

Tired students’ academics suffer due to their reduced concentration and lessoned ability to solve complex problems.

Some people may think this issue is about over-scheduled, over-achievers. Hamaker pointed out to me that it is about everyone, including “bringing the bottom up.”

She reports that one principal credited increased sleep time with a 50% drop in D & F grades for the school.

Beyond that, there are many physical and psychological impacts. They include:

So what are the obstacles to making a change? What pops easily to mind is the K-8 buses and the sports schedules.

Hamaker tells me that at least 6 other schools in state already overcame those obstacles. We can learn from their efforts.

Some flipped and adjusted bus schedules in service of the goal. And one principal told her that neighboring towns had been very accommodating to changes in the sports schedule.

Hamaker is leading a committee to draft a proposal to present to the school committee. She is looking for more input from Northborough and Southborough parents. (She says that the administration is supportive but parent support is necessary to drive a big change.)

For anyone who thinks that logistics are too difficult to manage, Hamaker responds:

It is paramount that we place the health of our children first so that they have the best opportunity to achieve to their true potential.

I couldn’t agree more. 12 years ago when my son waited in front of our house for the Algonquin bus the bus driver would routinely have to hit the horn to wake him and his friends up. They would be laying on the grass asleep!

I find this whole concept a bit suspicious. If kids aren’t getting enough sleep, it’s because they aren’t going to bed early enough. I actually agree that 7:20 is early and 8 would be better, but we have constraints and this is how the schedule best pans out. Any kid who is getting 3-4 hours of sleep is going to bed between 2 and 3 in the morning…. Hmmm clearly this problem could be (and should be) solved on the other side of the sleep cycle. Not too mention if you delay the start, they’ll just go to bed even later. Parents need to be parents and get their kids in bed.

The reason I inserted the line above “wondering what all the fuss is about, read last month’s story for details” is because many arguments like this are addressed. In that post, I shared that the research the committee explored included:

To read more on the committee’s concerns and cited sources, you can check out the “cliff notes” version of their research on their website – http://algonquinstarttime.weebly.com/2/post/2014/02/teen-sleep-needs-the-cliff-notes-version.html

SB resident, I think you may have just insulted me, and other parents of teens.
5:30 -6am is very early to get up and get ready for a 6:30AM bus. It’s not a matter of not enough or no night time supervision. And for the record – I and many of the parents I know are ontop of what’s going on in our home.

Realize that leaving the house at 6:25am for the bus, which my teen does, means that the vast majority of the school year that time is in total darkness. Prior to the clock change, it was just getting to be dawn, now it is again darkness.

I’ve heard over the years when discussing the schedule that the high school schedule is this way so that older kids are home when younger siblings come home, and for some families, provide care. If that is true and that is the reason “the schedule best pans out” it isn’t for the sake of the kids, but the convenience of some parents.

Sorry, I just realized that I missed the part where you were referring to the school’s news that many teens are getting only 3-4 hours sleep – not simply the early hour for rising. (So, clearly, you did read the other post!)

SB Resident: am I to assume you do not have high schoolers? Here’s an average school day: School starts at 7:20, but students have to be at a bus stop much earlier than that. Our school bus comes at around 6:25/6:30. Some kids have before-school activities, which means they have to be in even earlier. Sports/extracurriculars can mean that a student will not even be home until 7:30 or 8:00, and then after a late dinner, homework has to be completed. I’m not sure how much “parents need to be parents and get their kids in bed” has to do with it. It’s just not that simple.

It’s an exhausting schedule for high school students – even if they are in bed by 10p getting up at 6am is a struggle. A start time after 8am would be a huge help!