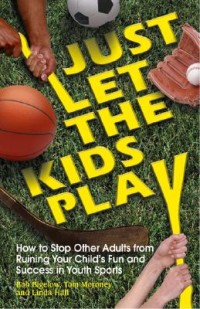 Next month, former Celtics player Bob Bigelow will be coming to Southborough.

Parents and coaches are invited to the talk from a top “100 Most Influential Sports Educators”.

His talk won’t focus on basketball.

As the author of Just Let the Kids play, Bigelow speaks to adults about “how they can give youth sports fun back to the children.”

Bob is one of the foremost youth sports speakers in the country. He advocates fully meeting the needs of children as the top priority in youth sports programs, and provides new approaches for positive change in youth sports. . .

Celtics Life wrote about the former NBA player’s concerns about the effects today’s organized sports can have on children. They quoted him as saying:

Coaches would have seen me when I was probably in fifth or sixth grade when I was tall but angular and awkward and would have made the decision that I really wasn’t a good basketball player. I didn’t start playing basketball until I was 14 years old, and seven years later I was a first round draft pick for the NBA. The good news for me is that back then we didn’t have a system where we had amateur adults making decisions that could have lifelong effects on children who maybe hadn’t yet revealed their potential. 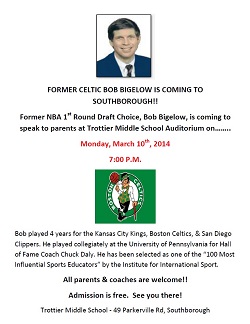 Want to hear more from Bigelow on his “prescriptions” for improving youth sports?

The free community event will be held 7:00 pm on Monday, March 10 at Trottier Middle School.

There are a ton of ‘ametuer adults’ as Bigelow states, coaching sports in town that should hear what this guy has to say. When I coached I encouraged all kids. Most coaches are there to move forward their own children. That is very sad because most of those kids go no where in sports at the higher levels and that is what Bigelow is saying and will say this night.

Bigelow is the author of the terrific book “Just Let tbe Kids Play!”

His goal is reduce the hyper competitive nature of today’s sports where some sports label kids as “A” and “B” level playets as early as the 4th grade!  This is nuts because 1) nobody can determine who will ne a great athlete based on 4th grade skills and 2) the “B” players get labeled as second class.

Lacrosse is an exception.  Lacrosse spreads the different skills and experience across all the teams so they are balanced without an A or B team.  Lacrosse also requires equal playjng time for all players.  Maybe that us why Lacrosse is the fastest growing sport in America!

I encourage all parents of youth sport players to attend.

Jim, You are absolutely correct. My son was big but not skilled. Now as he grows in to his skills at 16, 6’5″ 240 pounds of solid muscle, colleges are looking at him. If we had gone with the conventional wisdom (Southborough Parental Sports, A+B labels) he would be going no where. Unfortunately, most if not all of those A+B level sports players never end up going anywhere either because of the mentality of the parents. Further, I think we should have a fund to allow less fortunate kids to play sports. How many potential super stars are sitting at home not playing because their homes cannot afford the ever increasing fees (we all played pick up growing up do you remember?). Thanks for the post and hope your back is not too sore from shoveling 911 Saturday wit the boys ARHS lax team.

Well overdue and should be required for coaches and assistant coaches of all sports to attend. My husband coaches two sports and did not receive a notice specifically to attend this event which is a missed opportunity for all coaches. Also, from our experience, Lacrosse although pitched favorably, is unfortunately no exception to the competitive nature of sports in our community. Hoping for a good turnout tonight!

I agree this should be mandatory for town coaches. From an early age, the kids who make the A team get more opportunities than kids who don’t, reinforcing the difference between the levels. And I say this from the perspective of a parent whose kid has been on the A team. I know we get more and I don’t think its fair to the others.

Also, there are coaches that are more concerned with winning than in letting everyone play. This results in kids quitting because they are tired of sitting on the bench. You don’t get any better sitting while watching other kids play. Even the A team get split between those who play a lot and those who mostly sit. Winning is not that important. Everyone on the team should get equal playing time. Let them worry about winning when they get to high school.

Finally, while its not universal, most dads who coach think their kid is better than he is and play him more than 50% of the time and in some of the most desirable positions, at the expense of kids who are deemed to be not as good. I don’t know how to solve this since we rely on volunteer coaches. It would be nice if you could make a rule that people can’t coach their own kid but that just wouldn’t work. And yes, I have done my share of coaching and have been very conscious of trying to keep playing time equal and not favor my son.