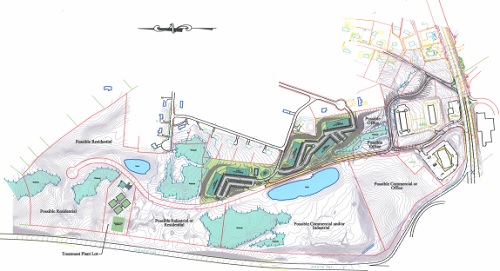 Above: Proposed Park Central 40B (Buildout Map from materials for August 2014 BOS Meeting)

Yesterday morning, I posted that the Zoning Board of Appeals’ next meeting agenda includes discussion of Park Central applications. Later, the town tweeted:

The town website’s home page posts a link to a February 11th letter from MassHousing. That letter granted Capital Group Properties developer Bill Depietri authority to proceed with the 40B development permitting process through the ZBA.

While the agency denied Southborough’s request to delay the process, it asked the developer to be prepared to address town concerns. Concerns included increase in traffic through access and egress neighborhoods.

According to the letter, the Capital Group Properties indicated willingness to:

Mass Housing also pointed to concerns about future use of the remaining acres of land.

The town wants land zoned for commercial and industrial zone be used for that purpose only. According to MassHousing, Depietri stated that he intends to develop that land only as office, flex space, warehouse or some other commercial use. However, he was not willing to guarantee that.

Depietri did agree to reserve an area on site for a future water storage tank for the town’s system. The agency asked Depietri to be prepared to discuss these issues.

Driver signage? That is not going to reduce speeding cars on Flagg or the other roads marked for access or egress. Nor will any number of trash containers prevent more litter from coming into the area. What will this do to transfer station fees? How will it impact the snow removal (shoddy as it currently is) on Flagg and those other streets?

This whole plan is lacking.

“install driver feedback signs on Flagg Road”? What is this sign?

I believe that refers to digital boards that posts drivers’ actual speed under a speed limit sign.

Another travesty for the town of Southboro. I hope we are ready to turn our schools into the Marlboro system. The town had better be ready to start dropping property taxes and come to the realization that what is best for Capital Group is not best for us. Over running a quite middle class neighborhood one of the very few in Southboro with overwhelming traffic is an absolute joke.

I’m pretty sure Mr Dipetri sends his kids to private school here in town as he destroys the community for the rest of us. Hey at least we get fireworks every year and he donates to our politicians. Seems reasonable to me. Bye, bye Southboro and a big thanks to out government!

Yes, Bill Dipetri does send his children to Fay but I do not understand why anyone would hold that against him. He is a developer who is trying to make money. He also has a very lengthy record of donations to this town. From the Fire Ball, to schools, etc. He is simply using all the options available to him.

I wonder if Flagg Rd was designated a scenic road would those big old trees be safe from being cut down to “improve” the flow of traffic.

I have addressed that issue several times over the years. As residents of Redgate/Hickory we went before the Planning Board to ask that 5 trees be cut down to make that intersection safer for pedestrians, drivers and most of all our children at the bus stop. One Planning Board member likened Flagg Road to a country road, not the bypass from Route 9 to Route 30 that it really has become After 3 meetings it was essentially turfed to the BOS and then rejected. I fear what Flagg Road will become after Mr. Depetri is done. If we will be increasing traffic to that extent, I hope that the Planning Board will make sure provisions are made to make Flagg Road appropriate for that amount of traffic. That may mean side walks being installed, the road widened and trees cut down. Mr Depietri and the Planning Board need to remember that children walk to school and ride bikes to school. If it must be done then let’s make sure there is a PLAN!! Not the typical NON-PLAN PLAN of Southborough. This is a big deal!! Please come up with a good plan to transition this small town to a larger town.This housing plan will essentially DOUBLE the houses and cars in this very small area. That being said I am against this housing plan and hope many residents turn out tonight to support the residents of Flagg Road and the neighborhoods. And yes SB Resident it will effect you, maybe not in your daily driving but in other aspects of home ownership in Southborough!

I would like to add that the sidewalks should extend the length of Flagg and Deerfoot Roads to provide safety to our children who like to walk to school.

My understanding is that Flagg is already a scenic road.

This doesn’t effect me much so I haven’t been paying attention but I am curious why the parking lots are tied in to tara and banry? Why isn’t the one entrance enough? Madison place only has one. I could understand having a secondary emergency access at one of those locations.

I feel bad for the people of that neighborhood, but by looking at the map, I do think that the majority of people probably would use the flagg rd entrance most of the time.

My understanding is that the state will not allow an exit directly onto Rte. 9 for this large volume of traffic, as it would be too close to the I-495 ramps. If this development goes ahead, the current entrance road to the Red Roof, etc. would become one-way only. The only exit would be through the Bantry/Tara neighborhoods and onto Flagg.

The state will not allow an exit on a major Rt, but the town will allow it to be dumped into a small neighborhood. I thought the added traffic would be minimal? Seems like the state holds higher standards to me, or has a different adgenda. It’s pretty clear the town needs to raise theirs.

This is not necessarily the case. What you have described is the MassDot recommendation for this area (which does not include neighborhood access). The current development plan from Capital Group includes entrance/exit from 3 points (Rt 9, Flagg, neighborhood), which is not necessary by any stretch.

Travesty for everyone in this area. If you don’t think that Clifford, deerfoot, parkerville along with Flagg and 30 will be in major trouble you’re mistaken. Never mind the schools in 5-10 yrs. The issues with these projects in the schools doesn’t show right away and two on top of each other will cause major issues for all. Start thinking about moving to westboro or hopkinton or save your money and go to marlboro. The boards are old members with no skin in the game for the young families. They are there for their own benefit and not the future of the community make sure to keep them honest and Remember this when you vote.

The town is not on your side they want this to happen so they can eliminate the exit on rt 9 it’s their excuse. I’m sure they will blame the state but don’t be fooled. I guarantee nobody from the state will be present at the meetings to come.

Barb, my confusion is that isn’t what the picture above is showing. There is an access via flagg road. That access seems like it should be sufficient for all the traffic so having the bantry/tara connections doesn’t buy anything as they will still come out on flagg to rt 9 at the same place.

After reading the article in the MWDN about Southborough Town Planner dropping the ball (for six months!!) on filing paperwork for Madison Place and its affordable housing units, we are now expected to believe that an adequate plan will be in place to insure the safety of the residents of, and specifically children walking along, Flagg Road? The road is winding and lined with trees and historic rock walls. The road cannot physically handle that amount of traffic, driver feedback signs or not. Sidewalks in the one neighborhood of Tara and Bantry Roads may be a nice gesture but the entire length of the road will be impacted – through Deerfoot Road and on to Main Street. With cars, buses, and walkers/bikers turning into Trottier Middle School entrances along Deerfoot Road, 180 units, with potentially at least two drivers each, dumped out on Flagg Road each day would be catastrophic to the neighborhood. I am unable to attend tonight’s meeting but implore other residents and town officials to really think this through and speak up for the best interests of our town.

I agree…. the citizens of Southborough cannot be expected to trust the town and developers to do the right thing here. Retaining an outside consultant to review ALL the projects recently approved, and where construction has begun, should be a priorety for the towns people before its to late like Barn Hollow. I understand that inspections are normal procedure, but not everything is always inspected if no one requests it.

Regarding your comment “…Southborough Town Planner dropping the ball (for six months!!) on filing paperwork for Madison Place and its affordable housing units”, I have yet to read any comment from the Planning Board acknowledging any mistake by the planner or the town administrator who I believe also had a hand in this error.

If I am mistaken re the town administrator’s role, please correct me. I generally think he has done a very good job.

1. I believe the late filing was done on the previous Planners watch.

This is phase 1 they won’t address future development yet. The true scope of this hasn’t even been taken into account.

Thanks for the fireworks and town “donations”

There is no doubt this is an important issue including the need to address the traffic issues. However I do not think JoJo is correct when he/she takes personal shots at the project developer, William Depietri. Where his children go to school is no one’s business but his and is certainly not relevant to this discussion. Mr. Depietri is actually very generous to many, local not for profit groups including the Southborough Education Foundation and the Town Scholarship Fund – both of which support all of our public schools.

0
Confused by the drawing

When looking at the proposed Park Central 40B Buildout Map, does the black line across Flagg Road, near the entrance to this proposed site indicate that Flagg Road would be turned into a dead end at that point? With entrance and exit available only to the housing development?

Would the town have the right to set the speed limit on Flagg Rd at 5 mph? Might discourage 40B folks from using it.

I agree, with speed bumps every 500 Ft down Flagg and Deerfoot.
As a new Flagg Rd resident with young children, this is very disappointing!