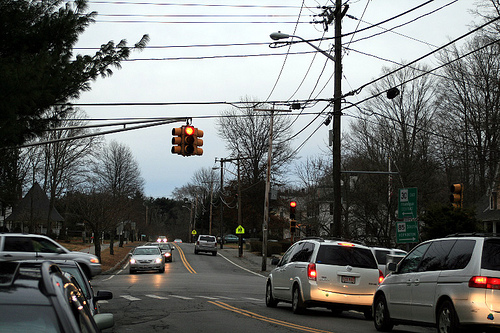 Above: The intersection of Route 30 & 85. There has been a lot of debate, and apparently misinformation, about what this would and should look like as a result of the slated Main Street construction project. (Photo by Susan Fitzgerald)

At last night’s Planning Board meeting, Town Planner Jennifer Burney shared that the date for the State Public Hearing on the Main Street project has been moved to April 30th.

Tonight, the Board of Selectmen’s agenda will include discussion of warrant articles on the Main Street project.

There has been a lot of passionate debate in the comments about the citizen’s petition article and the status of the project as it stands. Some of  the debated points will be discussed tonight, but there are also other meetings popping up on topic.

Tonight the BOS is likely to discuss sponsoring the now combined warrant article for the allowance and funding mechanism for undergrounding utilities.

Selectman Bill Boland told the Planning Board that he wants town voters to decide if they are willing to pay for undergrounding the utilities.

Boland said he has no problem with undergrounding utilities if that’s what voters choose. But, he doesn’t believe it makes sense to pursue work on an undergrounding project if voters will ultimately reject paying for it.

As for the citizen’s petitions on creating and funding a committee to explore changes to the project, it sounds like neither board is legally compelled to hold a public hearing. However, a public meeting is being planned by the Southborough Library.

Library Trustee Margarite Landry told me that the Board of Trustees believes the issue is one that a lot of people want to understand better. They are planning to hold a panel discussion with Q&A on Wednesday, March  26 at 7:00 pm.

Meanwhile, Department of Public Works Director Karen Galligan is planning a public meeting to clarify the current plans for the project. With assistance from the town’s contractor, the DPW Head will explain the plans and answer questions on Wednesday, April 2nd.

Galligan expressed concern that there is a lot of misinformation about the scale of the project, especially the width of the roads. For instance, the pine tree at the corner of the library won’t be effected. (I posted in February that Planning Board Chair Don Morris “lamented the future loss of stately trees like the one at the library on the corner of routes 85 and 30.”)

She also said that the project will not turn Route 30 & 85 into a major throughway alternate to route 9.

Boland also spoke about misinformation at the meeting. He was dismayed that people have referred to the project as not being vetted.

He explained that the project was vetted through many public meetings, and that many of the people living on Main Street attended them. He defended the project as having incorporated much of their feedback.

I’ll keep you posted on all of these meetings as details are firmed up.

If you are interested in seeing the full Planning Board meeting, you can check out the feed from Southborough Access Media.