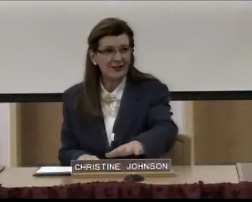 Johnson responded that it was an honor and a privilege:

Thank you so much for your vote of confidence.  . . I’m very excited and ready to go!

Johnson was the only candidate vetted for the position. But, the committees made it clear that they aren’t settling. She is the person they want for the job.

Based on feedback from The Massachusetts Association of School Committees, the committees decided in January to conduct an internal search.

When Johnson was the only applicant, the committees voted to proceed to interview without widening the search. As they sought to fill the opening for July 1st, timing was given as one reason.

On Wednesday, School committee members voiced admiration for her  impressive handling of last week’s interview and her work as Assistant Superintendent.

They enthusiastically praised Johnson as exceedingly qualified and capable. She was labeled:

Kathleen Harrigan, after recounting her experience working with Johnson on many projects and subcommittees –

My biggest concern a while back was that maybe she wouldn’t go for the job.

If you were going to make up a resume for superintendent, I think it would an awful lot like hers.

I think you’ve actually heard all of us thank you for putting your hat in the ring.

The Superintendency Union and Regional School Committee both voted to appoint Johnson to the job as of July 1st, subject to successful contract negotiation.

Answering Challand as to what Johnson’s biggest challenges will be, Gobron joked before turning serious:

The biggest challenge is, if she continues to work as hard as she does, she might have a breakdown . . . part of what we’ll be trying to work on is trying to bring balance to your life when you have so many responsibilities for three districts.

Gobron then described her top 3 challenges:

As Superintendent, Johnson will be responsible for 10 schools with 9 principals. Of course, her promotion means that she will have an Assistant Superintendent position to fill.

Another hiring challenge this spring is replacing outgoing Neary School Principal Linda Murdock, who is also set to retire this June. Gobron previously stated his hope to fill that position by April.

She was the only interview – explained in post above.

From what I have read via MWDN and My Southborough, the school committee decided to only look at internal candidates. And, the only internal candidate who applied was Ms. Johnson. To me it sounds as if she was really a strong candidate and the person that the school committee wanted so that is why it worked out this way. I don’t know her but am glad she has such a strong backing of support and glad for North and Southborough to have this smooth transition. It is hard to fill Dr. Gobron’s shoes but it sounds as if she will.