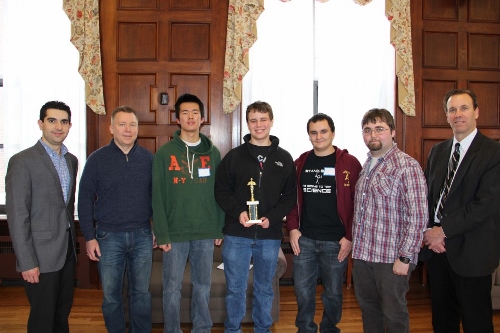 As I began working on students’ achievements, more kept rolling in! Here are  four stories about Southborough students’ success in academic competitions. 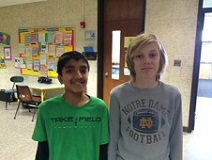 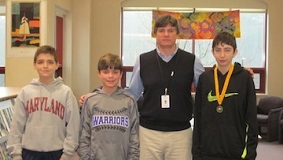 For the first year, both Neary and Trottier schools entered National Geographic’s Geography Bee. First, students voluntarily studied at home and attended some study and strategy sessions at school. Next, they competed through preliminary and championship rounds for the title of school champion. (Example question – The Yenisey-Angara river system is the second longest river system on which continent?)

Finally, each champion took and submitted a written exam to qualify for the state championship.

Only the top 100 scores in the states 4th-8th grade competition qualified. Both Bharathan Sundar (5th grade) and Sam Bond (7th grade) earned that honor. The state bee will be held Friday, April 4th in Worcester.

The Algonquin Harbinger posted the following story this month:

Neary and Trottier teams each earned a place at the state competitions. They will compete there on Saturday, March 29th at WPI. (Woodward’s level was non-competitive.)

was required to build a structure made completely of wood, glue and fishing wire to withstand two forces and bear weight. The team built and tested over 25 structures to learn about building, measurement, strength of materials, various kinds of forces- stress, buckling, compression and tension, and developed unique ways for their structure to bear maximum load with minimum weight of the structure. The team also wrote and performed a spoof about Washington’s war and the story of our independence. The team’s energy at the tournament was contagious, their enthusiasm was high, and their original, patriotic song was a perfect climax to the exciting day. All students were thrilled to receive the first place award!

Students designed and built containers and objects in such a manner that team-designed equipment would open the containers, remove the objects, and transport them across a 20-feet distance using technical methods. The team also wrote and performed an original skit about a character who used special technology to solve problems. The Sea Snake Sabers used magnetic technology, built an electromagnet to detect objects and used grabbers and vacuum cleaners to remove them. It was an intense challenge; time bound with a need for perfect coordination among team members.

To read the Recreation Department’s full story on all three teams, click here.

The WordMasters Challenge is an exercise in critical thinking that first encourages students to become familiar with a set of interesting new words (considerably harder than grade level), and then challenges them to use those words to complete analogies expressing various kinds of logical relationships. Working to solve the analogies helps students learn to think both analytically and metaphorically. Although most vocabulary enrichment and analogy-solving programs are designed for use by high school students, WordMasters Challenge materials have been specifically created for younger students in grades three through eight. They are particularly well suited for children who are motivated by the challenge of learning new words and enjoy the logical puzzles posed by analogies.

This year, Neary’s 4th grade team was among 417 teams in the Blue Division. Team member Stefan Linden was one of only 50 students to earn a perfect score in this year’s first national meet.

For the full story from Southborough Recreation, click here.