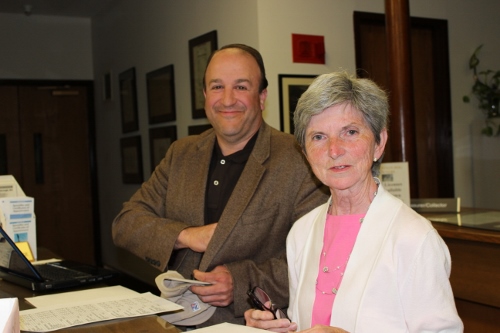 Above: Newly sworn in Board of Selectmen members Paul Cimino and Bonnie Phaneuf.

The results are in from today’s annual election. (If you want to know more about your newly elected/re-elected representatives, you can link to their position papers below.)

The “unofficial” tallies from the Town Clerk showed only 24% of registered voters participated in the highly contested race. The winners are:

Wondering how many votes the other candidates in the race received? Scroll down.

Cimino officially resigned from his post on the Planning Board tonight before swearing in with Phaneuf to become official members of the Board of Selectmen. Phaneuf is returning to the Board after choosing not to run for re-election in 2011.

They will join sitting members Bill Boland and John Rooney and re-elected member, Kolenda, to comprise the town’s first 5 person Board of Selectmen.

That board will meet tonight at 7:00 pm in the Town Hall Hearing Room. On the agenda is discussion of the recent layoff of the town Cemetery Supervisor. (Click here for agenda with packet).

Voters who participated in Town Meeting may have been surprised to see the ballot question asking if the Town should seek to change the position of Town Clerk from elected to appointed. May 12th voters weighed in against the measure 848 to 489. But it was already a moot point, since it was overwhelmingly shot down at Town Meeting. The question was placed on the ballot before Town Meeting, in case voters there approved putting it to ballot.

Those of you who didn’t vote, want to share your reasons?

Congrats to all the winners, and sincere thanks to all who ran. It’s a turbulent time for politicians at all levels, and your desire to help your town is appreciated!

I want to congratulate Dan Kolenda and Paul Cimino on their victories. They have their work cut out for them and I wish them well.

I also want to thank those that voted for me. Change is hard and I appreciate the confidence you showed me.

Finally, I want to thank the core of volunteers who helped me. I have to take responsibility for the result; I am ever in your debt for your tireless efforts and support.

Now it is time for me to plant my garden.

You wrote that *only* 24% of residents voted, but I found that number to be surprisingly large and I think that it shows in spite of town meetings small turnouts that there are a lot of people in town who care. People want their right to vote they just don’t want to be forced to sit through hours of bickering to get that right.

I think the above number would even be much higher if the vote was on things that are more tangible, such as if all the town meeting articles were ballot questions. In the case of yesterdays vote, it was hard to have a strong opinion though. I visited the info site on each candidate and they basically all gave the same canned spiel. It was really hard to differentiate between the candidates, which is why I think the incumbents usually win, better the devil you know.

Beth, do you have the rest of the results of the election. The number of blank votes and the one question that was on the ballet.

I did share the answer to question details above. For all the rest, you can see the full results from Town Clerk here: http://www.southboroughtown.com/townclerk/2014%20Election%20Info/Unofficial%20Results.pdf

People have short memories. When Bonnie Phaneuf was Selectman, the town was filled with front page scandals. Police chief scores hidden, Fire Dept.scandal regarding harassment of a female fireman, Pizza-gate, Triangle scandal, and the list goes on and on. This was when Phaneuf was one of 3 Selectmen and Chair Person on the board. It looks like cronyism is alive and well in Southborough. Congratulations to the Selectmen who don’t insert their personal agenda into the town affairs.

The campaign is over. Let’s give the winners 24 hours to celebrate and the losers a decent interval to lick their wounds.

Let’s give the 2 new selectmen the benefit of the doubt and pillory them for the next mistake they make and leave the bad old days behind us.

The voters have spoken.

Thank you, Candidate Hamilton, for that…an excellent example of taking the high road :-). I, for one, am very sorry you did not prevail and I thank you, as well as the other candidates, for running. Messages have been sent, let’s hope they are listened to.

I agree with Al Hamilton. Let’s make some positive resolutions that will benefit discourse on this site and in our town:
Give the 5-member board time before accusing them of transgressions;
Resolve to get the rate of participation – whether we vote, volunteer, run for office or join a committee – above 24%;
Be constructive when we disagree – it’s easy to focus on the bad, but it doesn’t resolve much;
And finally, and may be hoping for too much, let’s not blog anonymously. Let’s use our real name when we agree – or disagree.

As a candidate for Board of Selectmen this year I anticipated a higher than usual turnout of voters due to the historic shift to five Selectmen. I was still campaigning on election day and I was able to attach the “TODAY” sign to my lawn signs as a reminder to encourage more voter participation. A large flashing town sign to “Vote Today” would be much more visible.
Overall it was a learning experience for me to run this year. After many encounters at the transfer station, I realized most residents are generally satisfied with town governance but they want one or two things to be changed. With multiple issues the candidates are hard pressed to satisfy a majority of voters. In the end I think people may vote on who they know or possibly the personal attributes of the candidates such as how much service they have contributed to the town and whether the candidate is consistent and transparent about their views. Based on my experience I hope others will continue to run for contested offices as this is the only way to fulfill our traditional form of democracy established by John Adams in our state constitution.

I personally wish to extend a hearty thanks to many sign holders and campaigners on my behalf and the 449 voters who trusted my leadership and all the concerned residents at the transfer station who where willing to discuss their issues with me. Thank YOU!
Louis Fazen, MD

I totally agree with the idea of a sign, or a few signs in town to remind voters that it’s election day. I remember when the Firestation was a voting cite and it was the signs at the entrance that would remind me. Simple thing to do. Please.

Thank you Dr. Fazen for all of your hard work and thoughtul input into the selectman debates and town issues. It was a refreshing voice in the midst of chaos.

Dan,
I understand your frustration with people not using their real name on this blog, but let me assure you that some people have very good reason not to, so please keep that in mind. I’m not using my real name, because when I did, my family was exposed to vandalism with intent to injure, because I was a whistleblower and exposed a group of some very political people in town.
Al,
Waiting for the next mistake, as you say, is why “history tends to repeat itself” and “a tiger doesn’t change its stripes”, etc. These clichés are there for a reason, and in this case it’s cronyism. I personally have had enough of the mistakes by the cronies in this town. Instead, let’s say we’ll keep an eye out and expose the cronyism right away, so that it doesn’t affect the town for years to come. We don’t need to pillory them, but bring it to the town’s attention sooner rather than later.
As a side note, Al, I do read your blogs, and I think they are reasonable and sensible. You are the kind of person I’d like running the town, because of your fiscal attitude.