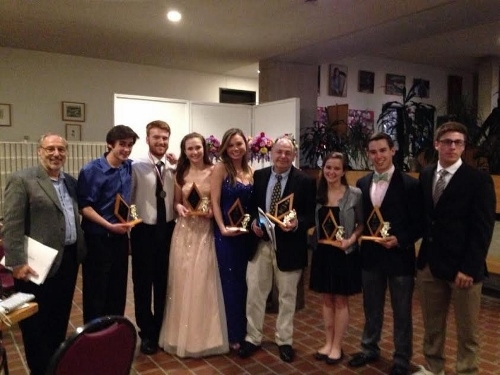 Above: The cast and crew of the ARHS musical Damn Yankees reveling in their big wins at the TAMY’s this month. (Contributed photo)

What’s a TAMY? Basically, it’s the area’s high school version of the TONY’s.

The awards are judged and granted by Theater at the Mount in central Mass. Judges considered 5-6 nominees for each category.

The Damn Yankees production was nominated for 12 awards. They won for the following categories:

Of course, congratulations are in order for the winners.

But there’s more reason than that to pay attention to this news.

The ARHS spring musical, The Apple Tree, is coming up next week. Much of the talent recognized in the fall will be involved this upcoming production.

Alera will again direct. Price will play the role of Passionella. And some of the other students whose talent helped garner the awards for production number and ensemble will be in the cast and crew.

Stay tuned for a dedicated post on that production later this week.

In the meantime, mark your calendars. The Apple Tree will run May 28-31st with performances at 7:00 pm.