Last Friday, The Boston Business Journal posted Massachusetts teacher salaries broken down by towns and districts. According to their figures, Southborough’s K-8 average teacher salaries moved up 11 spots from 2012 to #13th highest  in 2013.

In looking at the oveall statistics, BBJ wrote:

there’s really not much consistency among local towns and cities when it comes to teacher salaries and employment. Some communities are spending more than ever, while others are below where they were before the last recession. Many school districts have seen average teacher pay jump in recent years, while others have made cuts. . .

Here’s a quick look at the 2013 rankings and average salaries for our town and some neighbors:

Below are the details for Southborough and ARHS: 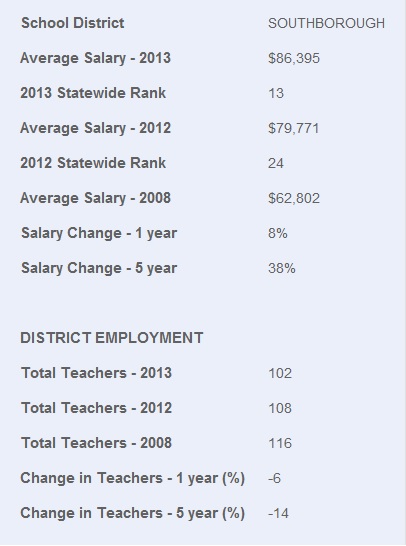 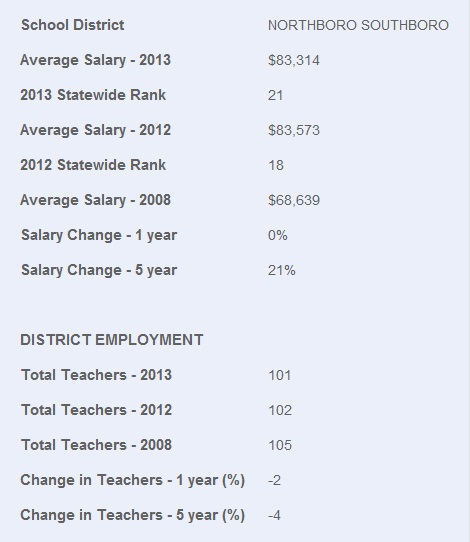 Wow those average salaries look high – what is the average yrs of experience and average degree earned level? …Would like to see what the median is as well (when I was teaching in Fitchburg my salary was still $35k after 4 yrs of experience but that was before getting a graduate degree – but I was still teaching high school kids and had a BA degree in Math and Economics…..)

Well that answers my long standing question on how come we are shedding teachers, but the budget is still going up… At least it isn’t really as bad as it look since presumably the teachers let go are the newest/least well paid.