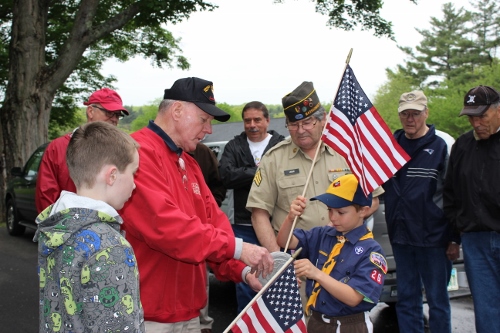 Below are photos capturing some of the ways residents honored Memorial Day this year.

Notably missing from the event was Boy Scout Troop 92. It turns out, they were paying their respects elswhere this weekend. Robert Flynn shared:

Southborough Boy Scout Troop 92 travelled to Gettysburg PA this Memorial Day weekend to pay respects to the fallen soldiers from the Civil War Battle. This is the site of the Soldiers National Cemetery, the cemetery which was dedicated by President Abraham Lincoln in November [1863], just four months after the three day battle. The troop, known this weekend as the 92nd Massachusetts, toured the battlefields for three days, and capped off the trip with a parade march in Class A uniforms to the monument for a moment of silence to honor all of our veterans, living and dead.

Flynn sent in photos from that event.

As for yesterday morning’s Memorial Day ceremony, I was out of town. Fortunately, reader Rachel Truman took some beautiful photos.

The symbolic firing of the guns. (Photo by Rachel Truman)

I can’t tell you how proud we were of our Scouts, who organized and marched themselves–in formation and in silence–to the National Cemetery, saluted our soldiers living and dead, pledged allegiance to our Flag, and recited the Scout Oath and Law. While we were all sorry to miss the parade, it was a most respectful absence–and kudos to Scout Jason and Assistant Scoutmaster Eric for representing us back in Southborough!