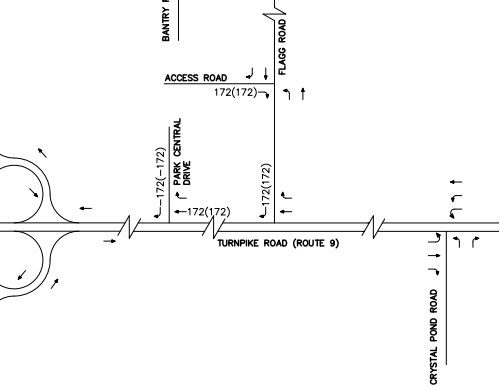 Above: The new traffic plan from Capital Group Properties would turn direct all traffic from Cumberland Farms, the Red Roof Inn, and the Park Central Development back to Flagg Road for entry to Route 9. (Image from page 23 of report on town website.)

This week, the proposed Park Central 40B development was back in front of the Zoning Board of Appeals.

The previously scheduled public hearing in April was postponed that evening. Residents in attendance were frustrated to learn that Capital Group Properties submitted a request to delay that afternoon.

Last minute applicant delays are a trend that has frustrated the board. This Wednesday, the board voted in a new “house rule” to curb that.

Applicants must now give 10 days notice to postpone a public hearing. Otherwise, they will need to appear before the board that night to explain their request. Only “a medical emergency or equivalent” will be granted exception.

Prior to beginning the Park Central hearing, Bartolini addressed a past public comment about mitigation talks:

This board has had no negotiations or any talk with on mitigation money on this project. The developer talked to town representatives of some sort in this but it’s not been done by this board at all. . .

It had nothing to do with us. And the individuals in the town that did it, really did it improperly because it only can be done by this board.

It wasn’t the only accusation of improper behavior made that night.

Representing project abutters, attorney Dan Hill said the recusal of a ZBA member due to pressure by Bill Depietri was “disturbing”. Hill said that he saw two letters sent to Edward Estella by Capital Group Properties’ attorneys. The letters pressured Estella to recuse himself for political/personal reasons. (You can read more on that in the Southborough Wicked Local story.)

Bartolini said that the board had just received Hill’s letter that day and hadn’t reviewed it. They couldn’t make any comment on it that night.

The subject of this week’s hearing was Capital Group Properties’ new traffic study. The report was based on converting developer owned Park Central Drive to right-only-access.

The plan would route all traffic from Cumberland Farms gas station, the Red Roof Inn, the 40B condos, and any future properties at Park Central onto Flagg Road for access to Route 9. The report stated that the change was “at the request of MassDOT”.

An attorney for Cumberland Farms countered the claim. Attorney John Smolak shared a letter from MassDOT assuring that “MassDOT is not requiring closure of egress from Park Central Drive to route 9 westbound.” Cumberland Farms representatives objected to the proposal.

Capital Group Properties’ attorney Angelo Catanzaro responded that MassDOT hasn’t made final decisions on the area. The traffic study needed to include the count in case MassDOT does push to close the street.

Bartolini stated that he plans to invite MassDOT to an upcoming meeting to explain their plans for Route 9 and Park Central Drive.

Smolak pointed out that the traffic study used data predating Cumberland Farms. He reported the site’s traffic as including 2,000 customers per day, 1-2 gasoline tankers per day, and dozens of delivery tractor trailers per week.

Rose called the presumption that only a few cars from the condos would travel through abutting neighborhoods “speculative at best”. He suggested that many drivers would prefer using Bantry Road towards alternative routes to the Flagg Road backup.

Bartolini said that following Wednesday’s meeting, the board would start the process on a Peer Review of the study.

Future meeting dates were discussed as June 18th and/or June 25th. (Agendas aren’t posted yet. So, stay tuned for details.)