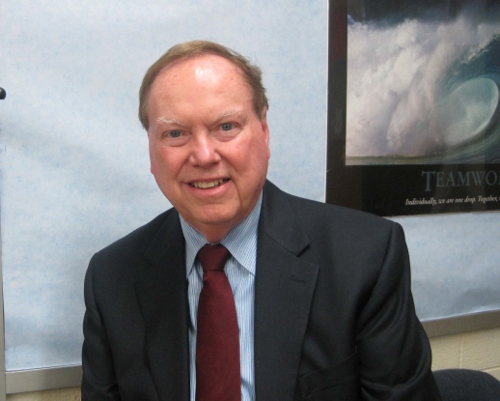 Above: After more than four decades working to educate Southborough students,

June 30th marked the end of Superintendent Charles Gobron’s 42 years working in the Southborough schools. As he prepared for his retirement, he sat down with Southborough Wicked Local to reflect on his career.

In 1972, Gobron left a private school to work as a 6th grade teacher in Southborough:

At age 28, the Boston native wasn’t yet sure he wanted a life in education, but promised Neary Principal P. Brent Trottier he’d stay at least two years.

“I stayed an extra 40,” Gobron said with a chuckle Friday from his bare-walled office at Neary. “But who’s counting?”

For 24 of those years, Gobron taught all the major subjects to 6th graders:

“I loved so much about it,” Gobron said. “I love the fact that there are beginning and endings – starting in September and seeing the growth of the kids in May and June.”

During those years and in the years to follow, Gobron’s leadership role in the schools grew:

Gobron served in leadership roles in the middle school for years, and also served several cycles as president of the teachers union. A self-described curriculum nut who’d helped the state teachers association put out a guide on the topic, Gobron was named the district’s director of curriculum in 2000.

In that role, Gobron said he worked to develop curriculum that focused on teaching students over the long haul – a philosophy he has consistently championed, including during debates about MCAS scores.

“When did it become a contest at third-grade, fourth-grade, fifth-grade?” he asked. “To me, when you really care about kids, you want to help them (long-term).. . .

In April 2007, Gobron moved into the top spot for the district. Having earned rave reviews from the school committees, and apparently a respected reputation outside the district, Gobron retired on a high note:

Gobron, who was recently named “Superintendent of the Year” by the New England League of Middle Schools, was also honored as a “Most Valuable Educator or School Worker” at Fenway Park last month.

“It was a dream come true,” said the rabid Red Sox fan.

As of July 1st, Superintendent Christine Johnson (formerly assistant superintendent) is now the head educator for the Northborough-Southborough district.

Strongly recommended by Gobron, Johnson was the school committees’ top choice and only candidate considered.

I worked with Dr. Gobron on a few occasions over my 22 years in Southboro and honestly one of the nicest men I have ever worked with. He had to negotiate so many different tasks and with so many different people it truly takes a special person and indeed he was and is. Thank you very much Dr. Gobron, I rarely have praise for a public servant but you are one that has earned it.

Beginning my tenth year on Regional School Committee and echoing everything said by Mr. Fuce and so many, many others over these past few final months of Dr. Gobron’s tenure.

When I first ran for Regional School Committee, I hoped to be involved in the selection of an effective Superintendent. There’s no doubt in my mind that my hopes were realized, in spades.

You’ll be missed, Charles. Thanks for all you’ve done and congratulations on your retirement. Because of your efforts with Christine Johnson, I’m also confident you’ve left us in very capable hands!