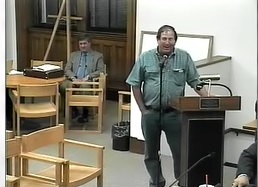 Left: ZBA Chair Leo Bartolini explains to selectmen that lack of interested applicants for the board may be related to “issues on the blog”.  (Image from Southborough Access Media video)

At last night’s Board of Selectmen meeting, three new members were appointed to the Planning Board and Zoning Board of Appeals. The appointments were uncontested.

A month ago, the choice between two Planning Board applicants resulted in a tie. (At that joint meeting, one member of the Planning Board was absent, making the tie possible.) The same night, the BOS discussed an unexpected vacancy on the ZBA. Selectmen planned to address that this month, possibly moving up an alternate to a full position. If that happened, they would need to replace the alternate.

Killing two birds with one stone, between meetings one Planning Board candidate asked to change his application to the position of alternate on the ZBA.
As a result, Jesse Stein was unanimously appointed to the Planning Board last night.

Selectman Dan Kolenda was disappointed that there was only one candidate for the full member of the ZBA. He believed that it is one of the town’s boards “where the responsibility of that board is heightened”. He stated that it benefits the town and appointed member to have multiple applicants to choose from. He said this is no slight on Capello, who “may very well be the best” for the position.

Bartolini stated that the only example he could find of a non-alternate member being appointed to full member on ZBA was in the 90’s when neither alternate wanted to move up. He argued that it is important for members to have the experience of sitting in on meetings as alternates.

He strongly recommended Cappello’s appointment based on her experience and work. She has already been sitting on ZBA hearings for the Park Central 40B, among many applications.

As for continuing a search, Bartolini says in addition to advertising, he tried reaching out to people to apply for the alternate seat.  He successfully recruited Dennington for the alternate position after seeing his qualifications in his Planning Board application.

Beyond that he summed up,  “Nobody wants to do it. And I think it has to do with some of the issues on the blog.” [As you must know, the board is often responsible for ruling on issues that are considered controversial and provoke many heated comments on this site.]

How can I put my name in for the ZBA alternate?

It’s too late this time around. But you can put your name in for the future or other positions using the town volunteer form.

Thanks Beth
I’ll be sure to fill it out.