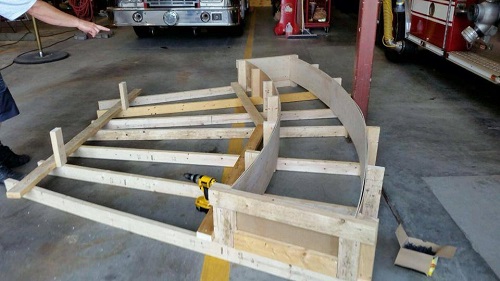 Earlier this month, drivers may have noticed a hole around the flagpole, or a pile of dirt in front of the Southborough Fire Department (SFD). It’s part of a two phase memorial project for police and fire personnel who committed their lives to civil service.

The project is through combined efforts including town scouts, volunteers from police and fire departments, and funding from the Southborough Community Preservation Committee.

Plans for the modular structure consist of four monuments: one for fire, and police personnel, one to remember the six firemen who perished in the Worcester Cold Storage and Warehouse Fire in 1999, and those who risked their lives at the World Trade Center on 9/11.

Bricks from the warehouse will be used, as well as, a small piece of steel from the World Trade Center.

“The memorial is not just a visual,” said Lt. Neal Aspesi, “it’s going to be a place where people can sit and reflect.”

The labor-intense phase has just begun. Off-duty firefighters built forms to pour concrete around the flagpole earlier this month and Southborough boy scouts held a work day in front of the station.

SFD and SPD wanted to do something like this since the late 70’s, according to Aspesi. When boy scout Freddie Pimm proposed to construct a  memorial as an Eagle Scout project, the two organizations were finally going to see its long-awaited dream come true.

According to Aspesi, the project would have been too big for one Eagle Scout, so they decided to split it into two phases. The first phase is complete: the design, materials, cost, finding vendors, donations, and getting approval from town boards. Boy scout Brett Ober will be taking over phase two as his project.

Members of the SFD and SPD associations, union, liaisons from the police department, and boy scouts have been instrumental in getting the project rolling, according to Aspesi. Southborough DPW has lent a hand, too.

On behalf of the memorial committee, Aspesi would like to thank the town for its support.

Members of the public are welcome to stop-by and check-out the progress.

The project is expected to be completed this fall. So, stay tuned.

I am glad to see this project finally coming to fruition.