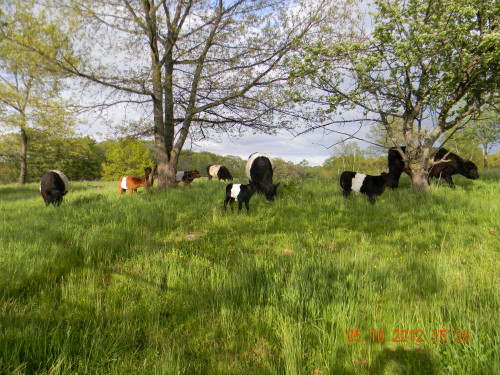 Above: BHCF Belties grazing on Breakneck Hill Farm in a summer past. Details of grazing rights are yet to be settled and fund members are worried about the future of the herd. (Photo by Paul Bourdon)

Recently, I posted about a misunderstanding between the Breakneck Hill Cow Fund and the Stewardship Committee. BCHF had apparently misinterpreted the committee’s concerns as a plan that threatened the herd.

Since then, BCHF presented town committees with their plan for the cow’s annual grazing rights on conservation land. Based on that discussion, the fund is again asking for public support.

According to members, the “Cows future is still uncertain”. They claim that Wetlands protection concerns may result in insufficient grazing area for a herd:

The Stewardship Committee and Conservation Commissions are scheduled to vote on the grazing rights on April 2nd.

According to a Southborough Wicked Local report, Stewardship members and fund organizers disagree over what measures are necessary to protect ground-nesting birds and handle over grazing.

Fund members are asking the community to support their plan at the meeting and/or by submitting advance letters.

The Fund’s explanation can be found here. Details on their plan and requested support are here.

SWL covered the March 12th meeting, including the Stewardship Committee’s stance on issues with the plan:

Under the plan, the cow fund proposes to use land that has been protected for ground nesting birds. Bourdon said research shows the land can be grazed in a bird-friendly way if not used between June 1 and July 15.

[Stewardship Committee Chair Jim] Gorss disagreed saying the land shouldn’t be used until Aug. 1 because of the bird habitat.

Laurie Bourdon, president of the fund, said experts think the cows on the land will help nesting.

“Right now, they don’t think there are any nesting birds anyways,” she said.

Stewardship member Freddie Gillespie said a birder has been on the land and seen ground nest birds.

“I don’t think it’s fair to say there are not birds there,” she said.

Gorss also said the land appears to be overgrazed. “It takes years for it to recover,” he said.

If the land is not grazed, then it will soon become a forest. This is true of most open land in Massachusetts. It only takes a few years; I’ve watched it happen with a lot in town that was cleared then left alone. After that, it would no longer be an appropriate nesting site for ground- nesting birds.

To be fair to the Stewardship Committee, I know that they want the cows to graze at Breakneck Hill. They have even pointed out that the cows help keep invasive plants in check.

It’s the details that are in question. And BCHF is claiming that it’s those details that may threaten their ability to keep the herd.