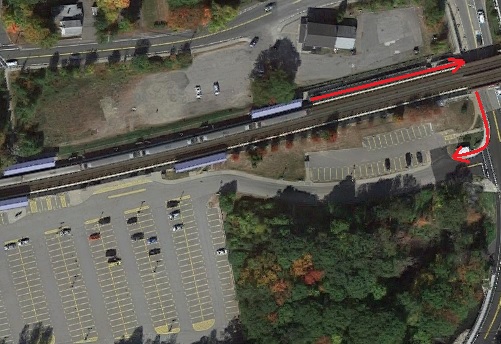 Above: For commuters who hate traversing a long U-turn just to access the MBTA parking lot, there may be hope for a better crossing. (Image cropped and edited from Google Maps)

Our state legislators answered questions from the Board of Selectmen last night on issues ranging from commuter rail access to public records legislation. Here are the highlights.

In an update on 911 field, Representative Carolyn Dykema said that supporters should start writing their letters of support in preparation for a public hearing.* (More on that further down.)

Regarding MBTA access Dykema believes the MBTA doesn’t have an appetite for adding parking or for building a bridge to cross over the rail tracks. But they may be willing to add safe track level crossing.

Selectman Brian Shea asked about improved crossing for returning commuters. Currently, to get to the MBTA parking lot from the westbound train, commuters have to head to the sidewalk along Route 85 to cross under the railroad bridge and head back towards the parking lot. (That trek has likely contributed to the number of people who choose instead to be picked up in Fitzgerald’s parking lot – to the ire of neighbors.)

Dykema told Shea that following up on input from a couple of constituents, she raised the issue with MBTA officials. She said that there is another station that has that ability for commuters to cross at track level. She is asking the MBTA to look at that for Southborough, to see if it can be done safely.

The representative made the request under the old administration, and again in a recent meeting after the appointment of a new Transportation Secretary. She told selectmen:

I think it’s definitely a conversation worth having. And if it’s not a safety concern, I can’t imagine why we wouldn’t be able to do that. . .

It would be helpful for us to know how many people are looking for that type of access and if that’s something the board would support.*

Selectman Paul Cimino responded that he believed “close to 100%” of the train’s commuters would be interested in the improvement.

Last night’s meeting (and the MBTA meetings) included Senator Jamie Eldridge. Earlier in the meeting, he and Dykema answered a question from Selectwoman Bonnie Phaneuf about any push for more parking by the MBTA. Neither had heard of any parking expansion that would effect Southborough.

Dykema said that if commuters have trouble parking at the Southborough stop, the MBTA would likely point them to the excess of parking in Ashland. She believed the only push for expanded parking was at stations closer to Boston.

Answering questions from Chair John Rooney on 9-11 field, Dykema explained it is currently in joint committee. They will have to schedule a hearing. She will let the town know when that will take place. The advance notice may be only by a number of days. Residents are encouraged to start putting together letters of support.*

(For those of you unfamiliar with 9-11 field legislation – the only turf field in town is leased from the Department of Conservation and Recreation. They limit the leases to five years. The expense of replacing the worn down turf requires a long-term bond. Dykema has been supporting the town’s efforts to force the DCR to allow a longer term lease.)

On other issues, Elderidge and Dykema were hopeful about increases in funding that impact Southborough in the yet-to-be-finalized budget. Those were mainly related to education – circuit breaker funding, regional transportation, and a Kindergarten expansion grant.

Rooney expressed concerns to Elderidge about proposed public records legislation. The chair said that new rules on improving online access to records was”almost” an unfunded mandate. He explained that the board supports the ideal, but he is concerned about the expense. Given the town’s “lean” budget and lack of internal IT support, the new rules would create a burden for the town.

The senator said his committee had just started to look at it and would likely be making changes. Those could include state funding for towns that need it and/or a longer deadline for implementing technology to meet the new rules.

*If you are interested in contacting the representative these or other issues, you can email carolyn.dykema@mahouse.gov. You can also speak to her at her upcoming “local office hours”. She’ll be meeting constituents on Monday, June 15th from 2:00 – 300 pm at Red Barn Coffee on Route 9 West, 205 Turnpike Road.

Why don’t they just dig out the passage way that was built under the tracks when the mill was a working business? For some unknown reason they filled it in. It was built with big square boulders and is better than anything they could build today for millions. By the way, NO to a paying lot at Fitzi’s, there are enough idiots now just doing pick-ups…