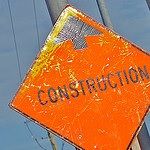 Above: The good news is that our roads are getting repaired. The bad news is that we need to expect delays while the work is done. (Photo from Flickr by cogdogblog)

It’s been a difficult commuting year in our area. And long term efforts to make it better may hurt a bit in the short term.

The Mass Department of Transportation has been at work on several projects in our area. Another one begins tonight.

A CodeRed alert from the town warns that MassDot will begin work on Route 30 (Main Street) between Sears Road and the Westborough line tonight, June 3rd.

According to the message:

Work will be performed during the night for the next several weeks.

Residents are warned to “expect evening, overnight and morning delays.”

The department has already began a paving project on the east side of Route 30, from East Meadow Street to Framingham. And it would be hard to miss the work that’s started on Route 9 from White Bagley Road into Westborough.

The Main Street roadwork will consist of planing the road and then paving it. That work will be completed by June 30th. (You can thank Selectman Brian Shea for asking Galligan to use CodeRed to alert to residents.)

Galligan informed the board that the state would also begin planing Route 9 Eastbound last night and paving Route 9 Westbound tonight.

The town’s water pipe project along Route 9 will begin this summer and continue into the fall. I will overlap MassDOT’s return to Route 9 for a “second lift” this summer.

Galligan also previewed a future Cordaville Road construction project from River Street to the DPW. Before going to Town Meeting for funding, she will be communicating with the public for feedback.

Best news I have heard all day!!! Thank you!

Is anyone else annoyed at this use of the Code Red Alert system?

I thought that system was intended for CODE RED alerts. Not traffic annoyances.. I was under the impression things like active shooter, tornado sighting, bomb scare, and kidnapping would fit the bill. Road construction is certainly not in the same league. More like code light green..

Am I off base here?

I did wonder if anyone would feel that way.

At the launch of the system, the town said residents could “opt in” to get non-emergency announcements. When I registered, I chose that option. If you did too and regret it, you may want to see if you can opt out.

On the other hand, it may have gone to everyone same as an emergency. If you live on that section of road or would be commuting on it tomorrow, you might be glad it did. (But maybe not.)

Unfortunately, the state didn’t give the town enough advance notice to warn people via other means.

Breakneck Hill equally, if not more overdue for paving than 30. This is an incredibly dangerous road in the condition it is in. Just a matter of time until there is a preventable death due to road conditions. I, and others, find it very hard to believe this isn’t being addressed.

The route 30 projects are done by the state because they own those sections of road.

0
In Favor of a Yellow Option

I have to agree with Southborough Dave. I halted a meeting at work today when I saw a Code Red coming in – I figured there was some major emergency or school disaster in progress. Maybe a “Code Yellow” or something less dramatic? Something that you know you need to listen to, but don’t need to drop everything for while trying not to make it obvious to everyone in the room that images of school shootings are running through your head?

CodeRed is the system name.

Right, it’s the name. But with a name like CodeRed it must have been started with the intention of sharing RED level notifications. They should have named it Community alert system if they wanted to use it for anything. That’s my only complaint.

Shaving cream issues at the high school, traffic alert issues at home, it is amazing we are able to function each and every day. This town is falling apart!

I am super glad that the west end of Main St. is getting repaved, but where does the project of the junctions of 85&30 stand? Does anyone know?

It’s reconstruction, not simple repaving. That makes it a bigger project. Construction is expected to begin in fiscal year 2017.

Here’s what I’ve gathered from meetings in the past:

In preparation the town will need to go to bid by early fall 2016. Prior to that there will need to be some easements approved at a town meeting.

And before that happens, there is still another design phase that needs to be finalized .(For things like the materials to be used for sidewalks & crosswalks, tree placement, etc. As well as some still to be resolved issues like parking on one stretch.) That will be followed by a public hearing or information session.

It is a shame they wont just repave all of Rt 30 – through the center of town. Quite honestly – that is all that needs to be done (and fix the sidewalks)

Actually, the DPW claims that the underlying structure of the road is in such bad shape it can’t support simple repaving.

Back in October, former DPW chief John Boland spoke about it. It was explained further by current head Karen Galligan in a Southborough Access Media video in November.

The reconstruction includes grinding down roads 10 more inches than a repaving project in order to build back up the road’s strength. That would happen even if this wasn’t a state project. There are also drainage issues.

You can see more about that here: https://mysouthborough.com/2014/11/06/roundup-of-town-news-updated-main-street-presentation-town-tax-collectors-may-take-titles-planned-info-hub-and-promoting-mentors/

The part of the video I’m referring to is about 4 minutes in.