Area high schools’ classes of 2015 have completed their graduation marches. Here are some highlights and images thanks to local media and social media.

“We’re a group of people who want to leave a legacy.” -Class Essayist Paul Nardone pic.twitter.com/9rQ9y9LMSV

While she started her speech Sunday afternoon at Algonquin Regional High School’s graduation with a lesson from biology class, Class President Emily Lowe spoke of the brain, heart, hands and feet in “non-scientific” terms. The brain is to remember the past, hearts to know right from wrong, hands for service and feet represent a journey, she said. “Know that life is not a one-way street,” Lowe told her fellow graduates. “It is never too late to make a U-turn and come back for help. Our footprints have made lasting impressions as we have traveled down the road of life. But like all the lessons we’ve learned throughout this journey, the paths that brought us here today shouldn’t be forgotten as we head into the future.” Lowe was joined by 350 fellow graduates who marched into the gymnasium to Edward Elgar’s “Pomp and Circumstance” was performed by the school’s symphonic band. (read more)

Community Advocate posted some great shots from the day. Click here to see them.

St. Mark’s School celebrated their “Prize Day” in late May. The school posted a recap of the ceremony on their website:

On Monday, May 25, 92 St. Markers received diplomas at the School’s 150th Prize Day. Five earned Classics Diplomas, having mastered both Greek and Latin, entitling each to wear a laurel wreath at the ceremony. (read more)

It’s another beautiful day here in Southborough and we’re thinking about the Class of 2015. May the wind be ever at your back!

If you’re wondering why it’s called Prize Day instead of graduation, the school dedicated a post to the explanation of the school’s traditions with five days of ceremonies here. 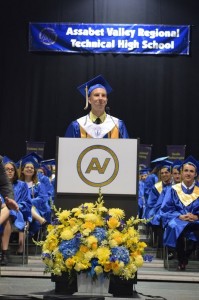 Four years ago, they were timid, quiet, uncertain of their future, and anxious about making new friends. Now they are young men and women with a goal, a clear path,and a solid foundation for success, whether it be college or career. They have friends from a plethora of communities, and they left as a cohesive unit, promising to stay in touch forever. We present our 2015 graduating class…..with best wishes and congratulations fo all!