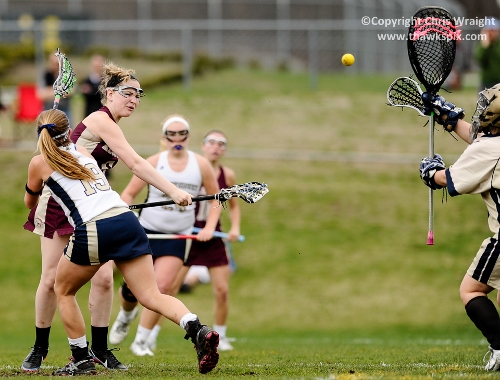 Above: Girls Lacrosse from 2014. That season, the Girls were knocked out of the districts in the Quarter Finals by Westborough. This week, they head to the semi-finals and could potentially face Westborough in the Finals. (Photo by Chris Wraight)

Once again, Algonquin Lacrosse teams are in sync. The third seed teams outplayed 6th seed competitors in the Quarter Finals. Now, they both have to overcome second seed rivals on competitors’ turf to make it to the Finals.

Fourth seed Softball won their Quarter Finals 2-0 against lower seed Tantasqua. On Wednesday, they’ll go up against top seed Wachusett in the Semi-Finals. Undefeated Wachusett has dominated the league this season. But Algonquin has been their stiffest competition, losing twice by only one point.

ARHS Tennis is disappointed to be out of the running in their district tournaments.

The Girls trounced South Hadley in their Quarter Final, 5-0 on Friday. They were knocked out in the next day’s Semi-Finals by second seed Shrewsbury, 4-1.

Baseball’s Quarter Final is still on for tonight, with the winner to play in Semi-Finals on Wednesday.

FYI…Softball teams don’t lose by “only one point”…score is kept in terms of runs.