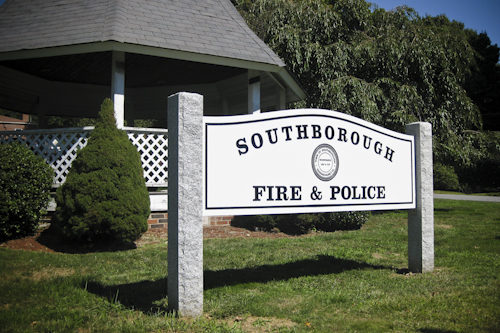 Above: The committee charged with evaluating the Town’s public safety building needs recommends a significant investment at the current location on Main Street. (Photo by Susan Fitzgerald)

The Public Safety Committee presented its initial findings on the Southborough’s police and fire station needs. The committee chair counseled investing in what “may be the most expensive thing we’ve ever done”, before delays cost the town even more.

The committee supports spending on constructing improved infrastructure for the public safety buildings as something the town needs and can afford to do. And they urged getting “shovels in the ground” by 2017.

PSC Chair Al Hamilton reported to the Board of Selectmen last night. [Editor’s note: Southborough Access Media posted the video at my request. I posted it at the bottom of the story for interested readers.]

The committee confirmed past chief reports that stations are in poor condition and insufficient for meeting the departments’ needs to serve the public.

The committee believes the Fire Station, with extensive repairs, renovations, and an expansion, can continue to be purposed. But the chair said they couldn’t recommend a use for the current police station (the old annex to St. Peter’s High School). Instead, they recommended building a new police station on the property, which would connect to the fire station.

The option of using the current site is one Hamilton referred to as their current “stake in the ground” which could be moved as things develop.

Last night’s presentation ballparked potential spending on the combined projects at $10-$15 million with an estimated impact on property taxes of $140 – $210 per year on a median home.

The committee chair recognized that the project investment is significant. But he counseled that owing to the state of the buildings (especially the police station) the Town can’t afford to keep putting the investment off:

This will be the biggest non-school project we’ve ever done. And from a financial perspective, this may be the most expensive thing we’ve ever done, because no one is going to share the expense as with a school. . .

If we delay [the police station] is going to force costs on us at its own whim.

Hamilton offered that some of the expense could be mitigated by other means:

The most obvious [opportunity] would be to rationalize our existing building inventory. And that could be used to offset the cost or add to the pool of funds available for this program. So, this is something our community can afford.

(The Board of Selectmen recently began work to form a committee to evaluate best use or disposition of town owned property and facilities.)

The committee is looking to develop a 50 year project to cover future growth. To do that in the current site requires more land than the Town owns. Hamilton believes that it would require about an acre of St. Mark’s School land.

Town Administrator Mark Purple said the school’s head master was “amenable” to discussing making it work. Apparently the the school is interested in the Town’s “stump dump”, which is also about an acre of land.

Other obstacles going forward include:

The committee did consider other sites for the stations. They determined that proximity to the Route 85 & Route 9 exchange was critical for quick access to all areas of town. They also agreed that having the stations share space (emergency ops, dispatch, conference space, etc.) was important. Looking at grades (for the fire truck), traffic flow, and other constraints, they determined the current site was the best option.

BOS Chair John Rooney pointed out that Hamilton is rarely known for saying “It’s time to spend some money”. [If you read Hamilton’s frequent comments on the blog, you know that he generally urges caution on town spending.]

Selectman Dan Kolenda was concerned about the ability of Police and Fire to continue working during construction. Hamilton responded that it may need to be staged over multiple years to allow that. He admitted that it was a challenge that the committee felt was over their heads:

We’re going to need some real help on how to do this.

Selectman Brian Shea, who worked on the 2007 Feasibility Study looking at the public safety buildings, recommended the committee begin conversations with the Historical Commission about the St. Peter’s Annex soon. Selectwoman Bonnie Phaneuf and former Selectman Bill Boland both urged having the discussion before spending more money. Speaking from the audience, Boland counseled the board not to “spend ten cents” on the project without first voting on what to do with the current building.

Hamilton agreed that everyone deserves to put in their “two cents.” But he said that if it remains on site, they would have to build around it. “If we want to preserve that building, then we are going to have to make some big decisions about that building.” He cautioned against “keeping the building and do nothing.” And he pointed out that the building isn’t protected by the Demolition Delay bylaw.

To avoid preservationists derailing the project, Hamilton encouraged having plans designed for both keeping and working around the annex.

Earlier, he informed selectmen that simply renovating the building for future use (not by the police) would cost 7 figures.

Selectman Paul Cimino probed if the committee was in consensus on the plan. Hamilton admitted that while the presentation was adopted unanimously, there were differences of opinions in their discussions. He said that he believed the Fire Chief would prefer a new station and there were others who wanted certain things. But he believed this was a workable plan.

One member of the committee, John Reed, will not be seeking re-appointment. Purple said that it will be important to fill his spot as he brought important engineering expertise to the table.

Anyone interested in putting there name in for that (or any other town committee vacancy) can click here.

[Updated Editor’s Note (6/17/15 4:45 pm): Since this is such a major investment for tax payers, it seems like an important issue to be well informed on. Southborough Access Media pulled the clip of the 1 hour presentation and discussion for me to share with interested readers. (I’m also still trying to get ahold of the powerpoint, since it isn’t clearly legible in the video.)]

So much to think about! And exciting, too.
My comment for now is on the possibility that we would be voting on one of the components of this/these projects at the time of the Presidential election. Since typically we get over a 90% turnout voting on that election, compared to a whole lot closer to the opposite end of the scale for local and state votes, it would be very illuminating to see what our votes are like when well over a majority turn out!
But then I also have to wonder if we can add a local question to a national ballot. We do include other national offices like Congreaapeople on loca/state ballots but, having never seen this suggestion, I’m wondering. An interesting question for our new Town Clerk to be checking, I’m sure..

I know we vote for state offices in the November election so I have assumed that local matters could also be on the same ballot but you are correct, this is a matter for our town clerk. If necessary, we could hold a special election or package the entire thing in the spring.

What is very clear is that we do not have the luxury of further delay. Some major system in the Police Station is going to fail in the foreseeable future.