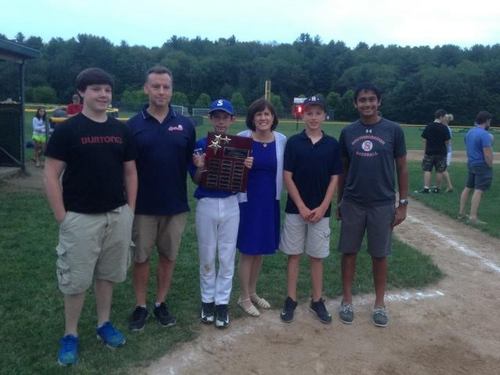 Above: 2015 Eric Green Sportsmanship recipient Andrew Hadden with Green’s parents and winners from past years. (Photo contributed by Jim McCarthy)

According to Eric Green’s parents, the late Southborough Little League player would volunteer to read the Little League Pledge before each game which states, “I trust in God. I love my country and will respect its laws. I will play fair and strive to win; But win or lose, I will always do my best.”

In 2012, the town league created a sportsmanship award in the memory of Eric, who passed away at the age of 12 from an undiagnosed heart condition in January of 2012. The honor is awarded to a 12 year old player each season.

The focus is encouraging players to always do their personal best. The award is granted to the player who:

best emulates the outstanding personal qualities exhibited by Eric during his baseball career and throughout his life… attributes such as good sportsmanship, perseverance and one’s overall commitment to team, friends, and family.

This year’s recipient is Andrew Hadden. His name is inscribed on a memorial plaque displayed at Trottier Midddle School and updated annually. Names above his are James Walsh, Neil Muskar, and Jeffrey Secrist.

Other players who were recognized as nominees for the award were Christopher Blake, Jake LaMalva, and Nick Zelaya.

The league shared pictures from this year’s ceremony.

Andrew Hadden with his parents, Leslie and Peter. (Photo contributed by Jim McCarthy).