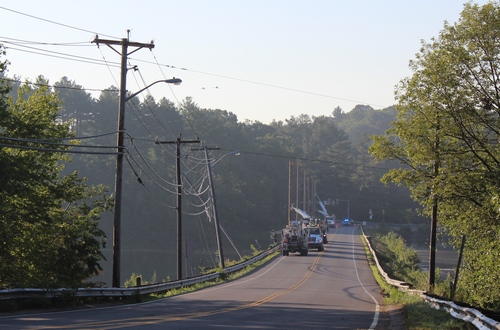 Above: National Grid working to repair poles knocked into the reservoir by last night’s storm. (photo by Joao Melo)

Last night a sudden, severe storm with estimated 60 mph winds, lightning, torrential rain and hail tore through town. Damage in its wake includes many downed trees and lines, power outages, and at least one crushed car.

Town officials are warning residents this morning that several roads are still closed due to downed trees and lines. Police are asking residents to obey signs and travel safely.

According to National Grid, more than 1/3 of Southborough “customers” were out of power last night. Some of us got power back early this morning. But NGrid’s latest update shows close to 1/4 of town isn’t expected to get power back until noon on Sunday.

It’s not surprising, since the storm knocked several utility poles into the reservoir along the Boston Road (Route 30) causeway. As of now, utility crews are still working to replace them.

A reader shared the above photo of a car pinned by a downed tree along the White Bagley Road side of the reservoir. He also tells me there are massive tree limbs down by the cemetery on Route 85.

Storm alerts after 5:30 pm last night shared potential for a thunderstorm. Updates after 7:00 pm began warning of severe storms with 60 mph winds and quarter sized hail moving through towns at 25 – 35 mph. The storm hit our town around 8:00 pm and seemed to last about 10 minutes.

Southborough Wicked Local reported on damage to the area. The following is the status last night:

There are trees down on top of cars blocking Rte. 9 in Framingham. At one location, a tree crushed a car on the westbound side of Rte. 9 near Oak Crest Drive. There were several people trapped in cars. First responders are not reporting serious injuries but said people have cuts from flying and broken glass.

Some roads are also flooded from the heavy rain. Fire departments and public works crews are awaiting utility workers to deal with numerous live wires down on roads and houses.

It’s unclear if the storm that swept through was a microburst.

According to Southborough Police Chief Ken Paulhus, there are over 30 down trees and power outages throughout town. Traffic lights on Rte. 9 are also out.

Updated (7/23/16 10:15 am): Took more photos of what’s happened around town. Damage at cemetery, Fayville playground, and Boston Road causeway. You can see them on the Facebook page.

Chainsawing neighbors out of their driveways.

Some of us don’t “do” Facebook so it woukd be super helpful if items of interest were on the webpage ☺ Thanks!

It was the quickest way to handle the photos on the go over the weekend. (I don’t normally work on weekends – it’s family time.)

Thanks, Beth, I didn’t realize that ☺

I thought the Ngrid crews did a tremendous job this time. It was also a 90 degree plus day they were working in on a weekend. How about a random act of kindness when you see them… thank them, bring a pitcher of water, and be courteous. People were actually giving the work crew in front of my house a bunch of razz, so sad. My house was fine so my neighbor and I cleaned up Parkerville in front of Finn so people could get through. It was good to see some of the common folk pitching in like the old days. Thank you NGRID.