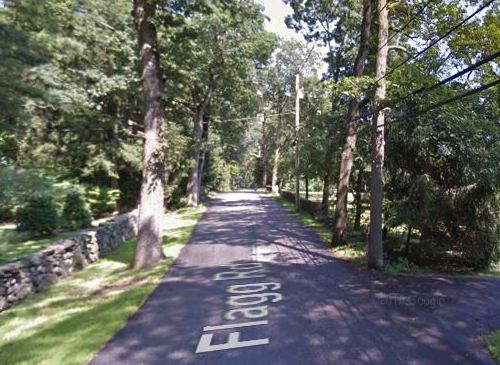 The Board of Selectmen voted 3-1 to force the developer and MassDOT to figure out a solution to Park Central egress/access. If they don’t, the board plans to prohibit the development’s access to Flagg Road.

For those of you somehow still not familiar, Park Central is a large-scale residential development off of Flagg Road. The project represents a 10% increase in Southborough homes (180 condos + 139 townhouses).

The developer’s stated future plans include addition of a hotel and assisted living facility. Current plans would have all of that traffic enter and exit via a windy, narrow, mature-tree lined road with old stone walls. The Zoning Board of Appeals did include a stipulation for a road sign directing drivers exiting the project to turn only towards Route 9 between 7:00 – 9:00 am. But Police Chief Kenneth Paulhus has said that he can’t promise resources to enforce the ban.

Many children walk down Flagg and connected Deerfoot to Trottier and Neary schools. There are also runners, walkers, cyclists, and no sidewalks. Recently, residents have complained that tractor trailers and commercial buses have taken to the road as a shortcut, courtesy of Waze (a navigation app).

Those are just some of the reasons petitioners are asking Special Town Meeting to urge selectmen to gate Flagg Road before Park Central.

Last night, selectmen heard the petitioner’s presentation. Asked for his take, Fire Chief Joseph Mauro told the board he had several concerns, including the general effect on response times, and possible icing issues in storms, causing the gate not to open. Based on that, the board couldn’t support the gate as a solution.

Next, they debated how they should address safety concerns on Flagg. Chair Brian Shea suggested it was important for the board to make a clear choice and communicate it to the developer.

Selectwoman Bonnie Phaneuf suggested a 2 tier apparoach. It was based on a fact shared by the article’s proponents: Park Central developer Bill Depietri never applied to the state for the project to access Park Central Drive.

In several past meetings, Depietri has said that the state won’t allow him to use Park Central to exit onto Route 9. Apparently, the denial was informally given to the developer in conversations with MassDOT. There is no official denial, as there was no official application.

Phaneuf moved to call on the developer to formally apply for access via Park Central Drive. Assuming a letter of denial was received, selectmen would then direct all Park Central access, in and out, be via the Route 9 end of Flagg Road.

Selectman Paul Cimino supported the idea that it is a state and developer problem. But he didn’t believe that her solution was tenable. Selectman John Rooney said he believed the motion was “too vanilla” and needed to be more aggressive. He again suggested outright denial of access to Flagg Road. Shea agreed that was more along the lines he was looking for.

Cimino asked Town Administrator Mark Purple if Town Counsel had answered on the legality of that move. Purple responded that he believed counsel opined it wasn’t legal if the land owner has frontage on the street.

Selectman Dan Kolenda, worried about the effects on the future residents. He suggested it was unfair to those school kids that they have to travel Rte 9 West, to the 495 loop, back to Rte 9 East, to Rte 85 towards Main Street, so that they can get to Trottier. He preferred to delay action to account for future residents’ needs.

Rooney rebutted thatwas why their solution should be in place before anyone buys into Park Central. The access restrictions should be part of potential residents’ decision making process.

Kolenda countered that could mean a potential lawsuit by the developer for devaluing the property. Rooney said it was possible, but it’s a suit he would be eager to defend.

Phaneuf pointed out to Kolenda that everyone in town faces inconvenience in their commutes. When she heads Route 9 East from her home on Middle Road, she has to take 9 West before she can reverse directions. It’s something residents buy into, versus safety issues.

Phaneuf’s motion failed 3-1. Cimino followed with his motion to:

notify the developer that, and take the position that, barring a solution to the access/egress issue of the Park Central project as currently planned and designed that we intend to disallow any access whatsoever from the project to Flagg Road and would take that specific action prior to the for sale of the project.

Kolenda argued that he couldn’t support it when he didn’t know what the final state would look like. Cimino responded that the solution was up to the developer and state to figure out.

All did agree that whatever “solution” is determined would require engineered plans, support by the safety chiefs, and approval from the board after getting consensus from residents.

Phaneuf and Shea voted to approve Cimino’s motion. Kolenda opposed. Rooney abstained from both votes (presumable due to the conflict of interest concerns as a tenant in an office building in the Park Central office park).

All well and good, but now the cancer still lives it called ZBA ,citizens petition and variance codes both by citizens were scoffed at and not discussed by selectmen, voting tax payers you deserve better, voices be heard ,open electives eyes .Mark Dassoni .

If this goes to litigation the cost to the Town will be enormous.

maybe so, but citizen safety and trust out cost litigation every time , Mark Dassoni

“Depietri has said that the state won’t allow him to use Park Central to exit onto Route 9. Apparently, the denial was informally given to the developer in conversations with MassDOT. There is no official denial, as there was no official application.”

If MassDOT is reluctant to approve Park Central egress onto a high-volume highway like Rt. 9, then there sure as Hell is an issue with the developer trying to dump the same traffic volume (both ways) onto a narrow country lane like Flagg Rd. . . .

Please . . . . take this to Land Court, because the the safety issues posed by Park Central are imminent, foreseeable, and significant to Southborough.

I should make clear, that everyone seems to believe it is true that MassDOT has told Depietri they don’t want him to use Park Central. And Depietri said that was why he hadn’t applied for a permit – he knew it wouldn’t be granted.

The sad part is all involved darn well knew this, and are trying to force it thorough anyway. Exactly why is still up in the air. But what is not is the fact that something stinks to high heaven with this whole project. Fortunately neighborhood residents see right thorough this and will not stand for it.

For more information on the scope of Park Central and its impact on Southborough visit the Heritage Day booth with the red tent cover.