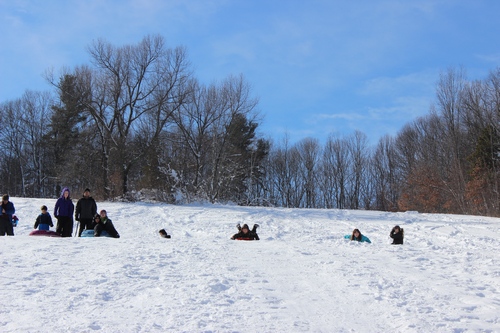 Above: Residents enjoy the golf course even in wintertime. Selectmen are hoping Town Meeting voters will approve purchasing the land for a public safety facility, open land, and potential community center. Otherwise, they claim the Town risks seeing big development on the site. (photo by Beth Melo)

The Board of Selectmen publicly confirmed that they are seeking to site a public safety building at St. Mark’s Golf Course. But according to Selectman John Rooney, that is just one of the reasons they are pursuing the land purchase.

Tuesday night, Rooney told the public that St. Mark’s School is determined to “monetize” the golf course by selling it. He said the board decided it was important to protect the land from a “future Park Central type of development.” Not pursuing the opportunity to purchase the land would be a dereliction of their duty.

Rooney didn’t address an issue that was raised to him by Latisquama residents weeks ago – their belief that the golf course is already protected from development.

Circulating emails have claimed that the golf course land was gifted to the school by an alumni with the restriction that it would remain a golf course. It was purportedly part of the reason a plan to build a development at the top of the golf course hill failed back in the 70’s.

Weeks ago, selectmen told residents they would look into that. That conversation was part of a “preview” Rooney said that he and Chair Brian Shea gave Latisquama Road residents weeks ago. The meeting took place while the officials continued to keep mum on plans in selectmen meetings and with the press.

Rooney justified the long silence as necessary, with the negotiations a moving target. At Tuesday’s BOS meeting, he said they just came to terms after receiving a proposal from St. Mark’s late Monday. Selectmen plan to bring their request to Town Meeting voters next April.

The deal includes giving the school the current public safety building site and a parcel, called the stump dump, on School Street. The school would use the land for new playing fields on campus.

Rooney said the cost to the Town for the golf course is well below what the school would get on the market.

According to Rooney, last winter selectmen originally contacted the school to negotiate enlarging the size of the current public safety building parcel. Within days, the school asked if they were interested in purchasing the golf course instead.

The Town has further incentive than just protecting the land. It would cost an estimated $1M (and lots of hassle) to temporarily relocated public safety personnel and equipment. Officials prefer to build a new facility while still using the old stations.

Officials also plan to discuss the possibility siting of a combined community center and senior center on the land. They would still preserve a large portion as open space.

As for Latisquama Road residents’ other concerns, Rooney said that he hears them. The fire chief has promised he has no desire for an exit onto Latisquama Road.

Rooney was less clear about concerns about seeing the facility in their front yards. He acknowledged the issue and promised there would be “strict deed restrictions”. But he didn’t clarify what that would mean.

There was also no mention of the possibility of St. Mark’s demolishing the current police station. There is a long history of preservationists seeking to protect the annex of the old Peter’s high school. It was a bone of contention between the Historical Commission and proponents of a new police station back in 2007.

Selectmen Paul Cimino assured the public that all of the details will be made available, and chances to ask questions, well before the Town Meeting vote.

*[Editor’s Note: Full disclosure, my parents still live in the house where I spent the last half of my youth, on Birchwood Drive off of Latisquama.]

I would like to clarify that the Public Safety Building Committee did not study this parcel as part of it’s examination and has made no determination as to its suitability or any potential location of a PS complex.

This work is commencing and will be done in public now that we have been tasked with developing a plan for this site. Any speculation about locations, curb cuts or other items is premature at this point. The public’s input is very welcome, our next meeting is Sat at 10:00 at the Fire Station we will then adjourn to the golf course (this still sounds bad when I write it) to tour the property.

Thank you. That was a question I had, that I had yet to ask.