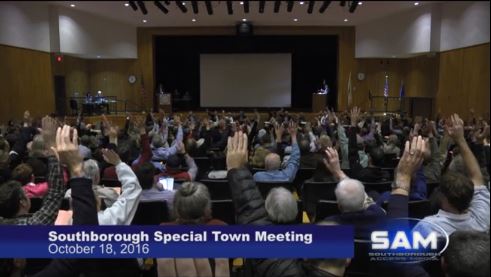 Above: The clear majority of voters chose to make the EDC come to them if they want permission to be a standing commission (image cropped from SAM video)

Last week, many voters registered their distress over the Town’s handling of the Park Central development. It was expressed through overwhelming approval to strip the Zoning Board of Appeals ability to grant Use Variances and again by supporting gating of Flagg Road.

Sandwiched between was an article to rescind Town Code that authorized a Industrial Development Commission. Through a Citizen’s Petition, voters were asked to stop the Economic Development Comittee from taking on the IDC’s old mantle, and the additional authority that purportedly came with it.

EDC had just argued to allow ZBA to keep its Use Variance authority. So, it’s not surprising that they lost the battle to be entrusted with greater power.

Earlier this year, the EDC announced its intent to transform into the IDC. EDC is an ad-hoc committee appointed by selectmen, not created by Town Meeting. As such, it is meant to have a temporary role in our government, with a deadline on their charge.

Meanwhile, the committee’s work to attract good business to town is valued by selectmen as a long-term, ongoing effort. So, the EDC was exploring how to become a permanent, standing committee. They discovered that in the 60s & 70s, Town Meeting voters had approved a similar commission – the IDC. That commission had been dormant for 24 years.

The EDC asked for selectmen to appoint their members to the IDC. They would use the committee’s charge, but maintain their current priorities and public name.

In past public meetings, Freddie Gillespie why wouldn’t the EDC just ask Town Meeting voters to approve them as a standing committee with an appropriate charge. She didn’t understand using a dormant commission with authority beyond the EDC’s scope.

EDC Chair Dave McCay said he didn’t see the point of creating a new body, when the IDC could just be populated. And Town Administrator Mark Purple said that the IDC speaks to the work EDC is doing.

Last week, fresh off her Article 6 victory over EDC opposition, Gillespie made her case to voters. She asked them to remove the IDC option by rescinding the commission and its Financing Authority.

Gillespie claimed that state language around the IDC gives the committee too much power. She said the 26 pages of legislation approving the finance authority have over 22 sections granting “a very all-encompassing authority” greater than what other committees in town have. That includes taking out bonds, hiring counsel, hire staff, and direct town staff to work for them.

And she pointed out that state statutes mandate IDC terms to last for 5 years. Terms of that length had recently been opposed by residents and selectmen. She summed up that the EDC could become a commission with Town Meeting approval.

EDC Chair Dave McCay assured voters that they wasn’t any great new authority they planned to take advantage of. He talked about the great work the EDC has done. And he said they still planned to operate the same way they do now.

This is simply a clean and easy way to make the Economic Development Committee a permanent commission.

Gillespie rebutted that if they want to be a commission, they should come before Town voters, explaining exactly how they would be formulated and operated.

Voters who had just stripped authority from a Town Board to avoid possible abuse of its charge agreed.

This doesn’t mean the EDC is going away. I’d be surprised not to see members back at Town Meeting in April asking voters to approve EDC as a standing commission. (Though, likely with shorter than 5-year terms.)

Of course, this is what happens when the town people lose faith that our representatives are acting in the best interest of the town.

I am sure there is plenty of great work that the EDC has done attracting businesses to the area, and its important to understand the impact the commercial development has done to reduce our tax base and provided employment opportunities for our residents.

Attached is the hyperlink to their microsite, in case you want more info, or maybe look at who sits on the EDC…. maybe listen to the short video.

Give them more power? I don’t think so. Through Park Central, we have seen what happens. I agree with Gillespie, let them come before the town, (the people they are actually representing, as there seems to be some confusion here), and let them explain.